First section expected to open in 2025. 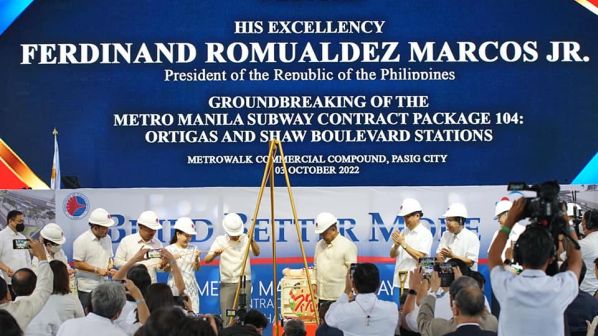 CONSTRUCTION has commenced on the first section of the Metro Manila Subway project, following a groundbreaking ceremony in Pasig City on October 3 led by the president of the Philippines, Mr Ferdinand Marcos.

“As we break the ground for this portion of our subway system, we fervently hope to soon enjoy the benefits that it brings to the general public,” Marcos said.

“With accessible stations that can cater to a massive volume of passengers, we anticipate helping our people skip the long lines of traffic and even spare themselves from the perils of commuting,” he added.

Manila’s new metro line runs for 33km from Valenzuela City to Ninoy Aquino International Airport (NAIA), serving a total of 17 stations. It is expected to be fully operational by 2028, with eight-car trains carrying up to 2242 passengers each.

Work has started on Contract Package 104 (CP104), awarded to a joint venture of Japanese contractors Tokyu and Tobishima with Megawide Construction of the Philippines for Pesos 17.75bn ($US 301m).

One of the seven civil works contracts for the Metro Manila Subway, CP104 covers the construction of the stations at Ortigas and Shaw Boulevard and 3.4km of tunnels using tunnel boring machines (TBMs). A further 19 TBMs will be launched on other sections by the end of this year.

The Department of Transportation (DoTr) has awarded CP103 to Sumitomo Mitsui Construction for Pesos 27bn. The package comprises civil works for the stations at Anonas and Katipunan and the running tunnels between them.

A Pesos 17.37bn contract to build stations and tunnels at Quezon Avenue and East Avenue has been awarded to a joint venture of Nishimatsu Construction of Japan and D M Consunji of the Philippines.

The Metro Manila Subway is costing a total of Pesos 488.47bn, financed through a loan from Japan International Cooperation Agency (Jica). Once fully operational, it will be able to carry up to 519,000 passengers a day.