A GROUNDBREAKING ceremony was held last week in Singapore to mark the start of construction on the Thomson Line, a major element of Singapore Land Transport Authority's (LTA) vision to double the length of island's railway network by 2030. 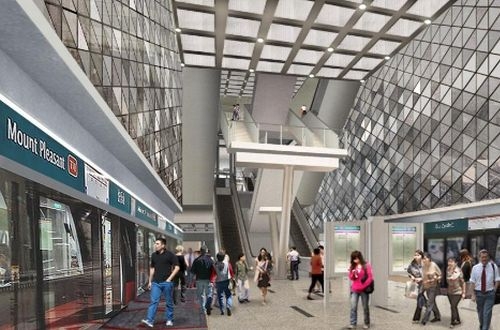 The 30km-long entirely underground line will have 22 stations and will link Gardens by the Bay in central Singapore with Woodlands in the north of the island. It will interchange with each of the five existing metro lines at six stations - Woodlands, Caldecott, Stevens, Orchard, Outram Park, and Marina Bay - and will open in stages beginning in 2019 up to 2021.

The line is expected to carry 400,000 passengers per day and significantly increase north-south railway capacity on the island by providing an additional link from the north to the central business district and Marina Bay Area. The line will also significantly cut journey times for certain commuters who currently rely on buses to connect with the existing metro network and will feed into the proposed 21km, 12-station Eastern Region Line, which will terminate at Changi.

LTA says that its engineers will for the first time use a ground freezing technique at Marina Bay station which is intended to prevent water seepage during tunnelling works. A series of pipes inserted into the ground and filled with brine will help to turn the surrounding groundwater into a series of strong and water-tight ice walls.

LTA placed a $S 749m ($US 597m) order with a consortium of Kawasaki Heavy Industries and CSR Qingdao Sifang for 91 four-car metro trains for the Thomson and Eastern Region lines at the end of May, while GE will provide a fully automated and driverless communications-based train control (CBTC) system for both lines. LTA says that $S 1.4bn worth of contracts have been awarded to local contractors and local joint ventures.

The three remaining contracts out of 25 for the project which encompass civil works at Orchard, Marina South and Gardens by the Bay stations will be awarded by the end of the year.

The August 2014 edition of International Railway Journal will feature an in-depth report on Singapore's current and future plans for its railway network.