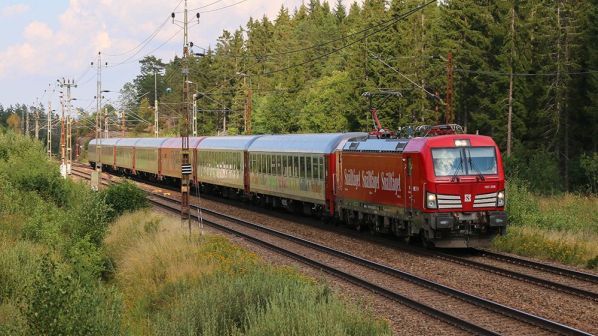 Snälltåget has seen a big increase in the number of passengers using it Sweden - Germany night trains since the route was extended to start from Stockholm.
Photo Credit: Snälltåget

SWEDISH long-distance operator Snälltåget has announced major growth in passenger numbers on its overnight trains between Sweden, Denmark and Germany.

The company says that since the launch during the Covid-19 pandemic of the Stockholm - Malmö - Copenhagen - Hamburg - Berlin route on June 27 2021, over 120,000 passengers have travelled on its overnight service. Compared with the Malmö - Berlin route that it replaced, this represents a 500% increase in passenger numbers.

Snälltåget runs the new route completely without subsidy as a commercial open access service, meaning that the trains only run when there is sufficient demand. Next year Snälltåget plans to increase the number of operating days from 220 to 240 in order to meet increasing passenger demand.

“This summer every departure has been fully booked and we have increased capacity with an extra coach with seating on several departures during July and early August,” says Snälltåget head of sales and marketing, Mr Marco Andersson. “We had 100% more travellers than last year.”

However, the company claims that competition from Swedish state operator SJ’s new overnight train between Sweden and Germany is unfair.

“SJ receives a state subsidy from the Swedish Transport Administration - Trafikverket - for operating parallel night train services with Snälltåget on over 100 days per year - days that we at Snälltåget already run on,” says Andersson. “It distorts competition and is just a waste of tax money. Snälltåget has to compete against the taxpayer. We are calling for fair conditions for all train companies - that competition takes place on equal terms and without state subsidy.”

Snälltåget points to the fact that in its contract with SJ, Trafikverket has the right to reduce the number of train services receiving state subsidy so as to preserve competition, - but it has not done so even though Snälltåget announced it would be increasing the number of services it operates before procurement for the SJ service began.

Snälltåget says it welcomes competition and agrees that more international capacity is needed, but reiterates the view that competition must take place on equal terms. It also calls for the simplification of the requirements for operating international trains to treat all operators fairly, including harmonised regulations for rolling stock, a reduction in track access charges for international services, and granting tax exemptions on fuel and VAT to match the aviation industry.

Snälltåget points out that the European Commission has made similar proposals to encourage international rail services across the European Union, but that the Swedish and Danish governments have chosen to take the different path of providing taxpayer subsidies to state-owned operators, which it likens to a person taking a painkiller rather than seeking a cure for a genuine health problem.