Competition for ÖBB on Tyrol route as it increases its international and domestic offering. 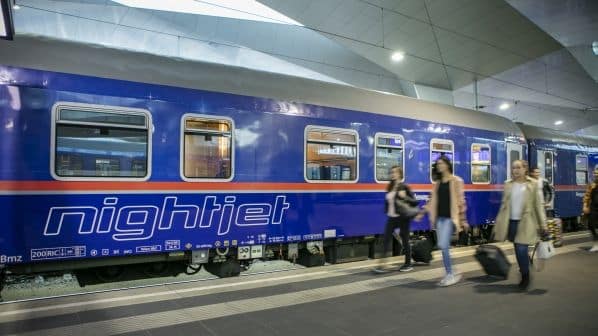 AUSTRIAN Federal Railways (ÖBB) has introduced day and night trains to new domestic and international destinations under the new European timetable that came into force on December 11.

New Nightjet services from Vienna and Munich will now take passengers to the Italian Riviera, extending these daily trains from Milan to the Ligurian cities of Genoa and La Spezia.

The German city of Stuttgart has also been newly connected to the Nightjet network, with the service now running from the Baden-Württemberg state capital via Munich to Venice.

In addition, the EuroNight trains from Budapest in Hungary and Zagreb and Rijeka in Croatia now have their route extended to run to Baden-Württemberg, while the popular EuroNight service from Vienna and Graz to Split will connect the Austrian cities with the Croatian Adriatic coast three times a week from the beginning of May 2023 until October.

ÖBB is also enhancing its daytime tourist offer, with the direct InterCity service from Vienna to the Salzkammergut towns of Bad Ischl, Hallstatt and Stainach-Irdning now being operated daily. At the weekend there is now also a new direct train from Vienna to Schladming in Styria and Bischofshofen in Salzburg, running through the Gesäuse National Park en route.

Also new in the timetable is a direct connection from Vienna via the Waldviertel and southern Bohemia to the Czech capital of Prague, avoiding the need for passengers to change trains at the border. This service operates once a day from Monday to Friday and then twice a day at weekends.

Some Austrian provincial capitals will also enjoy better connections with new early and late train services. On ÖBB’s southern route, two additional pairs of train between Vienna and Villach will make possible an hourly service to and from the state of Carinthia during rush-hour periods.

In addition, there will be an increased service on the Graz - Linz route, and there is now a new evening service from Salzburg to Graz.

With the new timetable change, Austrian private operator Westbahn has extended its Vienna - Salzburg service to Innsbruck, offering three trains a day in each direction in competition with ÖBB.

“It was on our wish list for a long time and today it’s finally here,” said Westbahn managing directors, Mr Thomas Posch and Mr Florian Kazalek, as the first of the new scheduled trains arrived at Innsbruck station. “This means we are able to meet the calls made in the numerous inquiries from the Tyrol that have asked for a train connection with our company over the years. We are pleased that we can finally offer the people of Tyrol an alternative to the state railway.”

Double-deck trains offering first class, comfort class and standard class accommodation are used on the route and initiatives such as Relax Check-in, transport association tickets, KlimaTicket Ö and West points can be used to obtain various discounts and advantages such as free seat reservations and payment for snacks and drinks at machines.

ÖBB has also increased the frequency of its services on the western route, including more morning trains and a late evening service from Vienna to Linz. Extensions of its existing services will also make it easier for passengers from Upper Austria to reach Salzburg or the Tyrol in the morning, or for air passengers to travel from Salzburg to Vienna Airport early in the morning.