AN executive order issued by Mr Joe Biden last week to address competition in the US economy has been criticised by the North American railway sector. 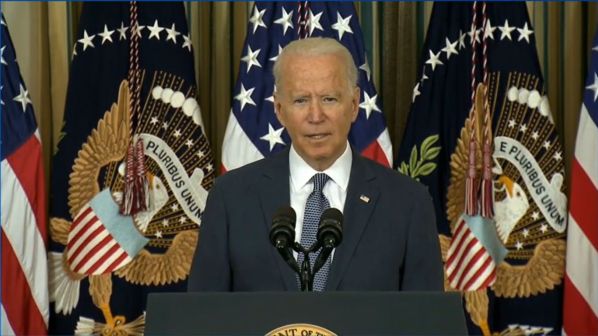 Joe Biden, president of the US

AN executive order issued by United States president, Mr Joe Biden, last week to address competition in America’s economy, including the introduction of open-access rail operations, has been roundly criticised by the North American railway sector.

The Association of American Railroads (AAR) describes the move to interfere with functioning freight markets as “misguided” and says that it could, ultimately, undermine the railways’ ability to reliably serve customers.

After Biden signed the order on July 9, AAR released a statement stating the independent Surface Transportation Board (STB) would have to consider a forced switching rule (where railroads could be forced to turn their traffic over to competitors at below-market rates) “and other ill-considered policy changes.”

“Competition is alive and well in the rapidly changing freight transportation market, with nearly three-quarters of all US freight shipments moving by a mode of transportation besides rail,” says AAR president and CEO, Mr Ian Jefferies.

“With the logistics chain already challenged by the recovery from Covid-19, this executive order throws an unnecessary wrench into freight rail’s critical role in providing the service that American families and businesses rely on every day.”

Jefferies claims that the investment in private infrastructure made by the railways, around $US 25bn per year, is only possible because of a market-based economic regulatory framework overseen by the STB. He says today’s average rail rates are 44% less than they were 40 years ago.

“Any STB action mandating forced switching would put railroads at a severe disadvantage to freight transportation providers that depend upon tax-payer funded infrastructure,” Jefferies says. “Such a rule would degrade rail’s significant benefits to both customers and the public by throttling network fluidity, disincentivising investment, increasing costs to shippers and consumers, and ultimately diverting traffic onto trucks and the nation’s already troubled highways.”.

The order points out that from 33 Class 1 railways in 1980 there are just seven today, with four major railway companies now dominating their respective geographic regions.

“Freight railroads that own the tracks can privilege their own freight traffic making it harder for passenger trains to have on-time service - and can overcharge other companies’ freight cars.”

Biden’s order is encouraging the STB to require railway track owners to provide rights of way to passenger rail and to strengthen their obligations to treat other freight companies fairly.

“America can’t succeed unless American business succeeds,” Biden said in a speech following the signing of the order. “But let me be very clear: capitalism without competition isn’t capitalism; it’s exploitation. Without healthy competition, big players can change and charge whatever they want and treat you however they want. And for too many Americans, that means accepting a bad deal for things that can’t go - you can’t go without.

“So, we know we’ve got a problem - a major problem. But we also have an incredible opportunity.  We can bring back more competition to more of the country, helping entrepreneurs and small businesses get in the game, helping workers get a better deal, helping families save money every month. The good news is we’ve done it before.”

STB chairman, Mr Martin J Oberman, voiced his support for the concerns raised in the executive order. “Competition is critical to the health of the rail industry and the significant role rail serves in the larger economy, and this executive order will help focus attention on these important issues,” he says.

Oberman says  he has been continually concerned with what he described as significant consolidation in the rail industry as a result of a series of mergers decades ago that reduced the number of Class 1 carriers.

“It is apparent that while consolidation may be beneficial under certain circumstances, it has also created the potential for monopolistic pricing and reductions in service to captive rail customers,” Oberman says. “Since consolidation, productivity gains often have been retained by carriers in lieu of being passed on to consumers, as would be expected in a truly competitive marketplace. For these reasons, I have previously stated my concerns with the sufficiency of competition in the rail industry and my interest in exploring ways the board can improve the rail industry’s competitive landscape in order to ensure fairer pricing.”

He adds that in his opinion competition in the freight market is ”paramount.”

Amtrak also weighed into the debate, stating that the executive order will open the country’s railway to a more frequent and reliable serviced.

Biden’s executive order comes while negotiations over the terms of the largest Class 1 merger since the 1990s continues. Canadian National (CN) and Kansas City Southern (KCS) entered into a definitive merger agreement on May 21, which if approved by the STB, will see KCS become a wholly owned subsidiary of CN.

However, Canadian Pacific, which originally set out to merge with KCS until CN stepped in, says the executive order sends clear messages that there should be no mergers that reduce competition or hurt passenger services, and that the economy actually needs more competition among railways.

Instead CP made the case for its proposed merger with Kansas City Southern (KCS), stating that it would be a positive step toward improving competition in the freight industry. It claims that the proposed CN-KCS merger creates competition issues and reduces options for customers. It also believes there will be challenges for existing Amtrak services on CN lines south of Chicago that it claims already have a history of operation issues and some of the worst on-time performance records in history.

Open access has long been sought by the rail freight shipper community as an expected more-efficient and effective competitive business model. Almost every US freight railway company resists the idea that nearby railway “A” can enter the privately built/owned/maintained tracks of railway “B” in order to serve a customer otherwise served only by railroad B.

The AAR and railways, plus the financial analysts, argue that open-access would decrease the value of the privately owned and maintained tracks of railroad B, in this case. They conclude that there would necessarily be a disincentive to continue to maintain and invest capital in such private track sections. Here is the counterpoint: Terminal railway districts and selected regional use of “open-access” track use or reciprocal switching has been operational for long periods of time. But no one ever cites multiple examples of “the owning carrier’s loss of track value.” The argument of an expected future loss of asset value when the owning carrier does in fact receive wear and tear and track usage compensation is an advanced hypothesis that neither the STB nor the private railroads have proven. The pending CSX-Pan Am and CN (or CP)-KCS acquisition cases are perfect places for assessing this issue as to pro and con impacts, with case study evidence.