The two-year plan has been proposed by the European Commission. 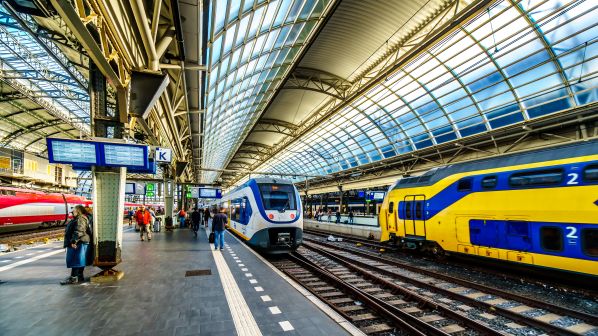 THE European Commission (EC) has released its action plan to improve cross-border rail services over the next two years, saying increasing the utilisation of rail is a matter of urgency to achieve its climate targets. The plan is one of four proposals adopted by the commission on December 14.

Rail also saw its modal share rise from 6.7 to 6.9% over the same period, while aviation’s share increased from 6.1% to 9.6%. However, cross-border passenger-km currently account for around just 7% of all railway passenger-km. The number of long-distance cross-border rail services has changed little since 2001, with around 4500 train pairs per week. The number of night trains services fell by 65%, while high-speed services increased by 95%.

The commission says operational and legal barriers continue to hamper the railway sector’s development and market-entry, which promoted it to undertake a study to identify actions to remove obstacles to the further development of cross-border and long-distance passenger rail services.

The commission is proposing accelerating the implementation of the four railway packages and the work to remove national operating and infrastructure rules as well as further developing deployment plans for the implementation of TSIs. The EC has also proposed accelerating the roll-out of ERTMS on the core TEN-T network to 2030 and to bring forward the deadline for the comprehensive network from 2050 to 2040.

The EC will also ensure compliance with technical specifications and common safety methods, continue to support equipping infrastructure with ERTMS with a special focus on closing existing gaps such as cross-border sections, nodes and terminal connections, and discuss the possibility of exempting the public financing of ERTMS from the notification obligation under state aid rules, which may speed up the roll out of ERTMS.

To improve infrastructure, the commission is proposing a revision of the TEN-T regulation, which will improve integration within the multimodal transport system. The proposed revised regulation will ensure:

The commission will work with the European Investment Bank (EIB) to seek pilot projects to acquire rolling stock under the Green Rail Investment Platform and InvestEU programme. The commission will also prepare “go-everywhere” passenger rolling stock specifications in cooperation with the European Union Agency for Railways (ERA), with a TSI deliverable expected for 2022, and will also clarify by 2023 the state aid rules on public funding of interoperable rolling stock for cross-border services in the revised railway guidelines. This will also address the issue of scrapping existing rolling stock.

In order to address limits for drivers working cross-border, the commission will propose in 2022 a revised regulatory framework addressing the shortcomings of the existing regime and limiting the recurrent obligation to obtain additional documents and certificates. The EC will also promote policies and programmes to up-skill and re-skill staff and to ensure that future skills needs are met.

The commission will propose a regulation, to be adopted by the end of 2022, on multimodal digital mobility services to enhance data exchange between mobility providers and facilitate the conclusion of fair commercial agreements among operators and with third-party ticket sellers, including journey continuation and protection in case of missed connections for passengers travelling on combined separate tickets.

The commission will also monitor the compliance with the new rail passenger rights regulation, which will enter into force in June 2023.

In order to ensure a level playing field between modes, the commission will work with the European parliament and council to facilitate a swift adoption of the Fit-for-55 package, including proposals on carbon pricing and emissions trading in transport modes, and will also assess the need for an EU-wide VAT exemption for international train services. It will also support and promote air-rail multimodal journeys on routes where the suitable infrastructure is in place to deliver such services, and assess regulatory options to facilitate such multimodal services.

In order to outline how PSOs can be used to promote sustainable cross-border services, the commission will publish interpretative guidelines in 2022 for applying the Land PSO Regulation, including to long-distance and cross-border rail passenger services.

In order to test and implement the measures identified in this action plan, the commission will support the launch of pilot services that could entail quicker city-to-city connections, making use of new approaches such as integrated timetabling, support for rolling stock, or PSOs for cross-border connections. The pilots could focus on key routes with a large potential to attract passengers to train services.

From 2022, the rail sector will be encouraged to submit proposals for 15 pilot services to test the action plan's approach, either for enhancing existing, or for the establishment of new services, which the commission hopes to launch by 2030.

The commission will support these pilots by facilitating contact between all relevant stakeholders, by:

The Community of European Railway and Infrastructure Companies (CER) welcomed the adoption of the action plan on long-distance rail, as did open-access operator FlixMobility, saying it rightfully emphasises that a reduction of track access charges is a necessary measure to create more services.

“To win more passengers for sustainable collective transport with buses and trains, it’s necessary to ensure fair market rules as the prerequisite for more services,” says FlixMobility founder and CEO, Mr André Schwämmlein. “EU countries must draw from the successful example of Sweden where fair track access charges will allow us to provide more services and attract more passengers to rail.”