Some groups express anger over the decision to axe the majority of the HS2 Eastern Leg and key components of Northern Powerhouse Rail (NPR). 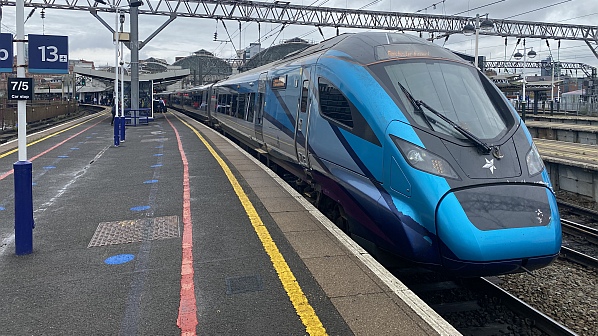 Investment in the north of England is needed to improve the region's transport system according to leaders.
Photo Credit: Richard Clinnick.

BRITAIN’s Integrated Rail Plan (IRP) has been roundly criticised by some government and opposition politicians as well as several transport bodies after the document confirmed the axing of the majority of the eastern leg of HS2 and the decision not to proceed with a new high-speed line between Manchester and Leeds via Bradford as part of the Northern Powerhouse Rail (NPR) scheme.

The government announced the £96bn spending plan on November 18, 322 days later than planned. The future of both NPR, which had been planned to be a series of new and upgraded lines across the North of England, and HS2, had become dependant upon the outcome of the plan.

Railway Industry Association (RIA) says it is difficult to see IRP as anything other than a piecemeal approach to a national strategic railway infrastructure given the abandonment of the HS2 Eastern Leg and scaling back of NPR.

However, National Infrastructure Commission (NIC) chair, Sir John Armitt, said Britain now has a realistic plan for major long-term investment to improve rail for the North and Midlands in the face of public spending constraints. “It is sensible that the IRP takes an adaptive approach, setting out a core pipeline of investment that should speed up delivery of benefits for communities and businesses,” Armitt says.

The IRP confirmed that the majority of the 198km eastern leg of HS2 would be axed in favour of upgrades to existing infrastructure. Plans to build new infrastructure across the Pennines as part of NPR were also rejected. Following the publication of the IRP, Ms Louise Gittins, interim chair of Transport for the North (TfN), the sub-transport body, described the plan as “woefully inadequate.”

In the same debate on November 18, the chairman of the government’s Transport Select Committee, Mr Huw Merriman, said that the prime minister had promised that HS2 and NPR were not an either, or option. “Those in Leeds and Bradford might be forgiven for viewing it today as neither,” Merriman said.

There has also been confirmation that Department for Transport (DfT) will assume the role of sole client for NPR from April 1 2022, ending TfN’s involvement in the project.

Since 2016, the NPR programme has been structured under a co-client framework with TfN, the sub-national transport body, responsible for instructing British infrastructure manager Network Rail (NR) and the Department for Transport (DfT) responsible for remitting HS2 Ltd. The government believes that while this worked “reasonably effectively” in the early phases of both projects there have been challenges including the accountability structure and complex funding channels.

The government wants TfN to fulfil a role of statutory adviser, convenor and speaking for northern England with “one voice” on the NPR programme and proposes that TfN transitions from co-client to co-operator. The precise terms will need to agreed according to a letter sent on November 18 to TfN chief executive, Mr Martin Tugwell, by director general, rail infrastructure group, Mr David Hughes, that was published by McMahon on Twitter on November 19. McMahon was critical of the move.

“It was clear that once TfN found its own voice and came up with a NPR plan the government didn’t support, it would meet its end,” he said. “This is a Whitehall power grab and the death nail to transport devolution.”

In the letter Hughes writes: “Establishing a single client answerable to the secretary of state for transport consistent with the NPR delivery model endorsed by the TfN board in January 2021 and will take on board lessons learned in other major programmes about the need for clear accountability.” He added that NPR will be funded within the normal arrangements for the Rail Network Enhancement Portfolio (RNEP).

Publication of IRP gives businesses and local leaders the reassurance they’ve been waiting for says Sir John Peace, chair of Midlands Connect. “Although these plans are different in some respects to what we’d expected, there are a lot of positives in here and lots of things to be excited about,” he said of the £96bn plans.

“It is positive to see confirmation of some local and regional rail projects within the plan - throughout the North and the Midlands - and the speed at which the government aims to deliver them,” said RIA chief executive, Mr Darren Caplan, adding that the short to medium impact of the Covid-19 pandemic on Britain and its economy had to be recognised,  He also highlighted prime minister Mr Boris Johnson’s public support for delivering HS2 in full.

“Our members will welcome the faster delivery and timescales for upgraded services across the North and Midlands,” says Ms Elaine Clark, CEO of Rail Forum Midlands. “We recognise that political and business leaders may be disappointed that some of the gaps in the plan and the scaling down of HS2 could hinder economic development. However, future schemes through the RNEP and optional schemes in the IRP itself may provide additional investment to address these issues.”

“While millions of people will benefit from this major investment in boosting connectivity between major cities in the North of England and the Midlands, leaving out key pieces of the jigsaw will inevitably hold back the ability for the railways to power the levelling up agenda and the drive to net zero,” says Mr Andy Bagnall, Rail Delivery Group director general.

For detailed data in rail projects in Britain and around the world, subscribe to IRJ Pro.