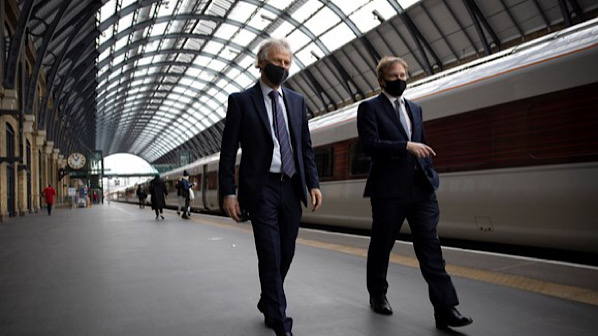 The initial details of Keith Williams (left) and Grant Shapps’ long-awaited report were released on May 19.

GREAT British Railways, a new public body which will integrate the country’s railways by owning the infrastructure, collecting fares revenue, running and planning the network, and setting most fares and timetables, is set to be established as part of sweeping reforms included in the long-awaited Williams-Shapps Plan for Rail, which was announced on May 19.

The government describes the creation of Great British Railways as the biggest change to the sector in 25 years. The complete Williams-Shapps plan will be made available to the public on May 20. But in a press statement on May 19, the government says the plan will set out the path towards a truly passenger-focused railway, underpinned by new contracts that prioritise punctual and reliable services.

Existing infrastructure manager Network Rail will be absorbed into Great British Railways in a move the government says will offer single, unified and accountable leadership for the national network. A new 30-year government plan for the railways will also be developed, which the government says will cover infrastructure investment and a new fares strategy to provide overall strategic direction for the rail sector. It says that the strategy will ensure schemes such as the Restoring Your Railway initiative to reinstate lines closed in the 1960s are prioritised.

In addition, the Williams-Shapps plan announces a comprehensive and costed environment plan, which will be delivered by 2022, as the railway targets becoming carbon neutral. The government says national coordination will give freight operators greater flexibility and responsiveness. There will also be the first national accessibility audit to ensure the railway works for everyone.

“Great British Railways marks a new era in the history of our railways,” says secretary of state for transport, Mr Grant Shapps. “It will become a familiar brand with a bold new vision for passengers – of punctual services, simpler tickets, and a modern green railway that meets the needs of the nation.”

Under the plan, Great British Railways will contract private partners to operate most trains to the timetables and fares it specifies under a model akin to Transport for London’s Overground and Docklands Light Railway services.

The government says private operators will have a substantial and often greater role than under the previous franchising model, which came to an end in September.

Passenger Service Contracts will replace National Rail Contracts (NRC), currently under negotiation with franchise operators to replace Emergency Recovery Measures Agreements (ERMA), introduced to support most franchise operators during the coronavirus pandemic while passenger numbers remained suppressed. The NRC contracts will begin to enter force later this year and will be in place for two years, acting as a bridge to the reform set to take place in the Passenger Service Contracts. These contracts will include strong incentives for operators to run high-quality services and increase passenger numbers.

Crucially, unlike franchising, the Passenger Service Contracts will not be one-size fits all. “As demand recovers, operators on some routes, particularly long-distance, will have more commercial freedom,” the government says. “Affordable walk-on fares and season ticket prices will be protected.”

In addition, the government says competitions for the new Passenger Service Contracts will not require complex long-term revenue forecasts, which was the case in franchising bidding. Instead the government says private operators will be challenged to provide a competitive and customer-focused offer, delivering greater value for money to the taxpayer. Local communities will have the opportunity to work with Great British Railways to design services and local leaders will also have greater control over local ticketing, timetables and stations. Interestingly, the new model will encourage innovative bidders such as community rail partnerships to bid to operate their local branch line.

“The pandemic has seen the government take unprecedented steps to protect services and jobs,” Shapps says. “It is now time to kick-start reforms that give the railways solid and stable foundations for the future, unleashing the competitive, innovative and expert abilities of the private sector, ensuring passengers come first."

The law on track access will be changed to enable it to deliver a simpler, more accountable system and end what the government describes as a “fragmented system that can cause inefficient use of the network.” Great British Railways will be responsible for planning the use of the network. The government says it will consult with passenger and freight open access operators to develop a new rules-based access system.

New national rail flexible season tickets are among the reforms included in the plan, which reflect changes in working patterns. The paperless ticket will allow travel on eight days in a 28-day period and the first tickets are set to go on sale on June 21 for use by June 28. Passengers will be able to tap smartcards or smart phones at the station with no need to select the day of travel in advance. Exact details of the savings will be provided before tickets go on sale but the government says they are expected to save two-day a week commuters hundreds of pounds.

“For many, the idea of travelling five days a week to the office is fast becoming a relic of the past,” Shapps says. “The future is flexible; passengers want a simple stree-free option and new flexible tickets make fares fairer.”

Various industry bodies issued statements in support of the plan.

Mr Andrew Haines, chief executive, Network Rail: “These changes will take time, but I am determined to get to work quickly with the industry and government. The pandemic has created significant challenges for the industry, and that means the changes we have to make are even more urgent. We must attract passengers back, deliver efficiencies and improve the service we provide. Today marks the start of an exciting new chapter for our railway, a chapter that puts the passenger first.”

Mr Robert Nisbet, director of nations and regions at the Rail Delivery Group, which represents operators: “Flexi Season tickets are a step in the right direction, but to really maximise the benefits and make it easier for people to get good value fares requires government to go further and get under the bonnet to fix the engine of the fares system.”

Mr Tobyn Hughes, managing director of Transport North East and rail lead at the Urban Transport Group: “The Williams-Shapps plan is an opportunity to build on the success of devolved rail networks like London Overground and Merseyrail by giving transport authorities a stronger role in line with local aspirations and capabilities. There is an immediate opportunity on fares and ticketing to better integrate rail with existing city region smart and multi-modal ticketing products. Passengers in the city regions want a joined up public transport network with a single ticketing system and rail needs to be part of this, not standing outside of it.”