IRJ at ERA Moving Towards the Single European Rail Area conference, Luxembourg: European transport commissioner Mrs Violeta Bulc has warned that there will be no more European Union funding for rail investment unless member states and railways embrace the Fourth Railway Package when it comes into force next year. 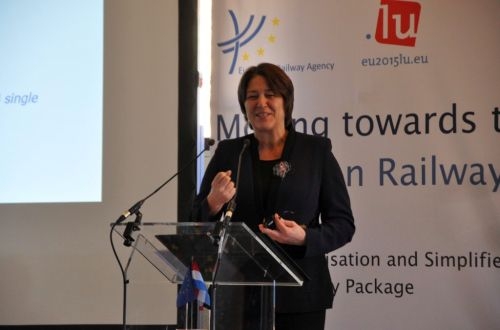 "We have invested a lot in rail, but I won't invest a single dime more if railways don't get involved," Bulc told delegates at the European Railway Agency s (ERA) Moving Towards the Single European Rail Area conference in Luxembourg on November 23. "I want to reduce the number of airports in Europe but only if rail delivers."

Bulc told delegates she sees the potential for rail to make an important contribution to improving the quality of life. "A lot of the network has already been electrified and rail is a good answer to congestion, she says. "But I expect you to lower your prices and improve efficiency. We have given some countries a special status in the Fourth Railway Package but if they don't deliver they will lose it."

"I want to see rail deliver a new business model. We want you to create an attractive system, to be a bit sexy, and a bit market driven. But please forget about subsidies, at least a little."

Bulc stressed the Fourth Railway Package is a final chance to "clean the house" because many member states have yet to fully implement the first, second and third packages. She said there won't be any more railway packages.

The commissioner expressed her dismay that there are more than 11,000 national rules for rail in Europe. "I used to be a businesswomen, so this really freaked me out," she says.

"The Fourth Railway Package will deliver a 20% reduction to the cost of market entry for new operators - which is huge - and a 20% reduction in cost and time to introduce new rolling stock, which will produce a saving of €500m by 2025, which can be used for innovation."

Bulc concluded by issuing a clear ultimatum to the industry. "I want a single transport area, but it is up to you whether rail plays its role," she says. "We need newcomers to challenge the status quo. You have to be attractive to attract customers. We will support rail when it takes steps forward, but if you don't deliver there are other modes."