SCI Verkehr says this will result in strong growth in the rail technology market. 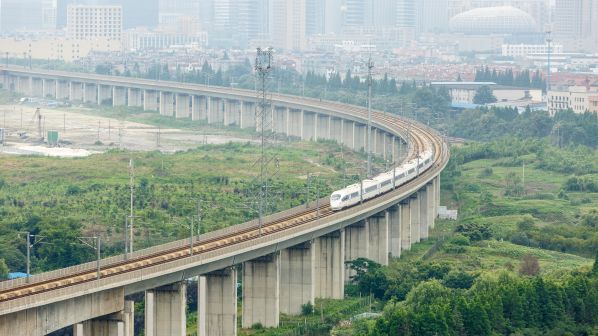 That rate that China has expanded its network outstrips all other countries around the world.
Photo Credit: Shutterstock/ABCDstock

CHINA has changed its approach to the rail sector from network expansion to improving efficiency in its 14th five-year plan from 2021-2025, according to market analysts SCI Verkehr.

The Chinese Railway Market study, released on May 10, found the state railway is changing course with digitalisation and automation now set to play a more important role than network expansion.

While the Chinese rail technology market will continue to grow in the next five years, SCI says this growth will be driven by digital innovations and, in particular, the dynamically growing after-sales business instead of new line construction and new rolling stock.

The Chinese rail technology market is worth €37bn, and is expected to grow by 3.6% annually until 2025, with the after-sales market growing at a compound annual growth rate (CAGR) of 9.3%.

Due to reductions in new procurements in the high-speed segment, new business will remain at the current level across all segments, with a CAGR of 0.7%. Dynamic growth in the OEM market is expected for the freight wagon, EMU and LRV segments.

Chinese rail technology companies have been investing heavily in the research and development of modern technology for years. The central government’s strategic plan “Made in China 2025,” issued in 2015, especially targets high-tech sectors, including part of the rail sector which is currently largely dominated by foreign companies.

SCI says this means that foreign rail technology companies will face increasingly more competition in the Chinese rail market. For example, foreign companies currently only have a 30% market share for some of the high-safety components on the new Fuxing high-speed trains, compared with 80% for the previous CRH model.

Simultaneously, Chinese manufacturers are increasingly targeting foreign markets, partly due to the weakening domestic demand. For example, the large state-owned companies CRRC, China Railway Engineering Corporation (CREC) and China Railway Construction Corporation (CRCC) have been able to win orders in almost all world regions in recent years. However, SCI says Chinese railway and infrastructure companies still only have a small market share in important regions such as Europe, North America and the Commonwealth of Independent States (CIS), albeit with an upward trajectory.