IRJ at InnoTrans 2016: Germany’s minister of transport and digital infrastructure Mr Alexander Dobrindt, says he wants to ban noisy freight trains by 2020, ahead of the European Commission’s plan to introduce regulations on the reduction of train noise. 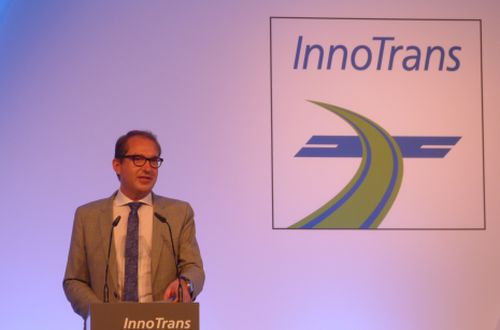 “We are in dispute over this, just as we are with the infrastructure levy,” Dobrindt says. “We will remain firm on this issue.” Dobrindt believes the public will only accept a strategy to transfer more freight from road to the rail if trains are made quieter.

Turning to another policy initiative, Dobrindt said: “Diesel locomotives must become a thing of the past.” Dobrindt want to see more of the German rail net electrified even though only half of the network in Germany is currently electrified.

However, Dobrindt says that if electrification on this scale is too expensive alternatives to diesel traction such as battery or fuel cell technology will need to be considered. The transport ministry has contributed nearly €8m to aid the development of the world’s first multiple-unit train powered by fuel cells: Alstom’s Coradia iLint.