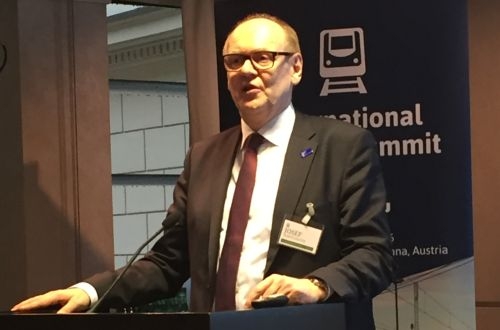 Josef Doppelbauer speaking at the International Railway Summit in Vienna.

Passage of the technical pillar will transform ERA into a centralised body, or "one-stop-shop" for vehicle authorisation and safety certification. Doppelbauer says that currently rail suffers compared with aviation through the sheer number of trains available for procurement "with up to 200 available of the same type" and the two-year certification time for new vehicles. ERA's new role will improve this process by reducing from 10 to one the number of bodies required to certify equipment. However, Doppelbauer is clear that ERA will require greater resources in order to perform its duties adequately.

"This is the critical question," Doppelbauer says. "We wanted to avoid putting costs in a legal act as this would confuse the process so we are now beginning to negotiate with DG Budget over what the budget for ERA will be."

ERTMS remains another contentious issue but Doppelbauer told the summit that he is satisfied with the passage on February 10 of the Technical Standard for Interoperability (TSI) for ERTMS Baseline 3 release 2 and the stability this will bring.

"This is a major milestone for ERTMS," he says. "We now have a stable and functionally complete version which will be kept stable for several years."

He was also open to working with the International Union of Railways (UIC). The UIC's director general, Mr Jean-Pierre Loubinoux, who spoke from the audience during the conference session, says that as a global organisation promoting interoperability, innovation and standardisation, including in Europe, he is keen to develop mutual cooperation between the UIC and ERA. However, he questioned the possibility of duplication between the UIC's and ERA's work, a point which Doppelbauer was keen to address.

"We don't want to standardise everything because it is not necessary," Doppelbauer says. "It is important to agree with the UIC where we can cooperate and not step on each other's toes. We are very happy that various standards are driven by the UIC and are not subjected to legal standardisation. This helps everyone to operate more efficiently."

Doppelbauer added that it is important that the railway industry continues to push for greater competition and innovation. He pointed out that since the introduction of NTV in Italy, trains now departs between Milan and Rome every few minutes which has all but killed off air traffic between the two cities, showing that competition clearly works in the industry's favour. He was also encouraged by the appointment of Mr Carlo Borghini as executive director of Shift2Rail. However, he was forthright that more needs to be done to advance rail's cause. In particular despite investment, to increase rail's 6-7% market share of the passenger sector, which remains flat.

"We love trains," he says. "It has great potential and the benefits of rail are clearly huge. However, they have to be in the right environment. Last mile remains a difficulty, but if through innovation we can deploy lithium batteries and super capacitors to help trains do the last mile we can help to advance the industry. Unfortunately at the moment asset utilisation remains a big problem."