IRJ at InnoTrans 2016: Growing demand from other modes and industries for internet-connected technologies requires urgent action from the rail industry to protect the bandwidth it has already secured and will require in the future, according to Mr Josef Doppelbauer, executive director of the European Union Agency for Railways. 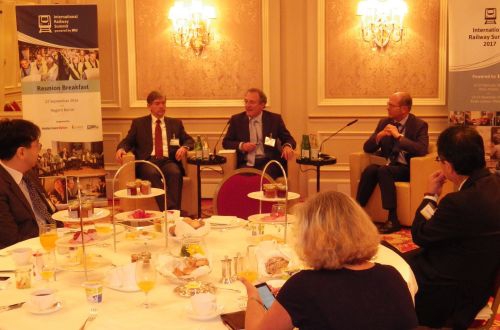 Digital and smart technologies and how the industry utilises these to improve performance has been a major theme of InnoTrans 2016. However, Doppelbauer argued that the rail industry needs a coordinated and united approach to secure the level of radio coverage it requires.

“Digitisation is an opportunity but it is also a threat,” said Doppelbauer, who was speaking at the International Railway Summit reunion breakfast hosted by IRJ and IRITS in Berlin. “Digitisation is multi-modal; it is about an end-to-end seamless journey. But there are limits on bandwidth. The automotive sector needs huge bandwidth of up 500MB/s for automatic cars. My fear is that they will take it all and we will lose the little bit we have for things like ERTMS.”

Mr Libor Lochmann, executive director, of the Community of European Railways and Infrastructure Managers (CER), argued that regulation is required to guarantee sufficient coverage for railways in the future.

“As a community of railways we should actively engage with the cellular operators to ensure they understand our needs,” Lochman said. “Our voice is still relatively small, which is why we believe that we require regulation which will oblige them to serve us.”

Greater cooperation and establishing a shared voice was the overarching theme of the debate, which also touched on the importance of a coordinated approach to securing funds for rail in the next Connecting Europe Facility (CEF) funding programme. The industry also needs to start thinking about how it will approach Shift2Rail 2.

“The deadline for Shift2Rail 1 in 2020 is getting quite close and it likely that the commission will begin to ask about this next year,” said Mr Philippe Citroën, director general of the European Rail Industry Association (Unife). “This will require lobbying by all of us because it will require investments in networks across the Union because we will require more networks to achieve the future digitisation of the railway.”