Huw Merriman, who was addressing the RIA annual conference in London, said cutting project costs is essential to accelerating the electrification programme. 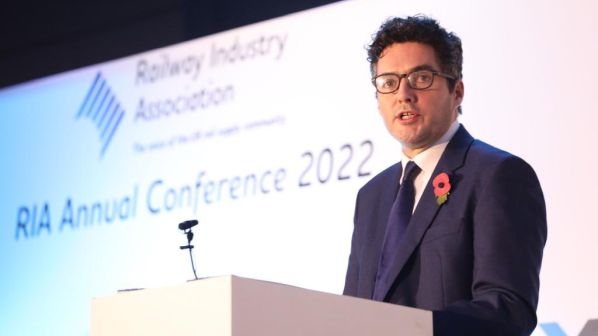 RECENTLY appointed as minister of state at Britain’s Department for Transport (DfT) with specific responsibility for rail and the High Speed 2 (HS2) project, Mr Huw Merriman gave his first speech in his new role at the Railway Industry Association (RIA) annual conference in London on November 10.

“This is the job I have always wanted to do,” he said, “taking responsibility for one of the most essential parts of our national infrastructure.”

Merriman is no stranger to the industry as, unusually for a minister, he previously chaired the Transport Select Committee of the House of Commons for two years. The committee’s remit is to hold ministers and government departments to account and investigate matters of public concern.

However, he was soon warning his audience drawn mainly from Britain’s railway supply industry that tough decisions lay ahead, given the poor state of government finances and a worsening economic climate where inflation is rising alongside the cost of materials and energy.

Merriman pointed out that the government has provided £16bn for the rail industry since March 2020, mainly to support operators as passenger numbers plummeted due to the Covid-19 pandemic.

“That level of support is unsustainable,” he said. “Rail must demonstrate value for money, must decarbonise and must attract new customers.”

Merriman said that rail was responsible for 1.5% of emissions by the transport sector, but there were still 700 diesel vehicles on the national network that the government hopes will be diesel-free by 2040 and will achieve net zero emissions by 2050.

He feels that electrification is key to achieving this, but pointed out that the cost of electrifying a single kilometre of track in Britain was four times higher than in Germany. “I want to work with all of you to put that right,” Merriman said.

Due to the recent political turmoil in Britain, Merriman noted that he was the third rail minister to be appointed in as many months. But he stressed that the new DfT ministerial team under secretary of state, Mr Mark Harper, was made up of policy experts who were now ready to get to work.

“This government will always back our railways,” he said. “A growing, sustainable railway is the solution.”

Taking questions from the audience later in the conference, Mr Andrew Haines, the chief executive of infrastructure manager Network Rail (NR), was candid as to the scale of the challenge to electrify 11,000 track-km by 2050.

He described the task as “almost impossible” given the current climate, particularly regarding the cost of electrification.

NR was making significant progress in reducing the cost of electrification projects, Haines said. He pointed to ongoing work in Scotland where the cost was one third of the most expensive sections of the Great Western Main Line project.

The ultimate goal would be an “all in” cost of under £2m per single track-km. NR is currently targeting a cost of £2.5m for the next phase of the Midland Main Line electrification project, where work is now underway between Market Harborough and Wigston, south of Leicester.

It is also looking at ways to enable trains to keep running on parallel tracks when electrification work is in progress, where the loading gauge would allow this.

“I’m really optimistic we can do our bit, make these changes and the lower the cost,” Haines said. “We want the supply chain to come to the party.”