The policy would enable full decarbonisation of Europe’s railways. 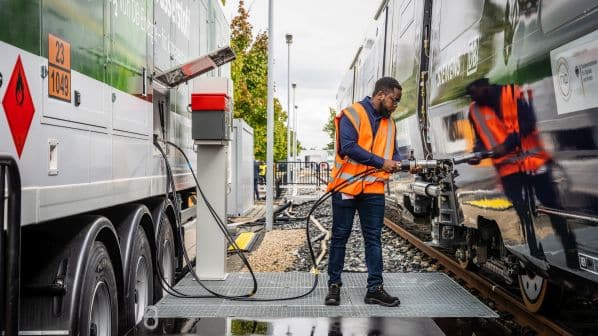 THE European Parliament plenary in Strasbourg has approved a proposal on developing alternative fuels infrastructure (AFIR).

The transport sector, which currently accounts for more than a quarter of EU emissions, is aiming to reduce greenhouse gas emissions by 90%.

While the main objectives of the AFIR regulation cover the recharging or refuelling of road vehicles or ships with alternative fuels, the policy has also been welcomed by the European Rail Supply Industry Association (Unife) and the Community of European Railway and Infrastructure Companies (CER). The groups say that the development is significant as it will enable the European rail sector to proceed on a path towards full decarbonisation, and to lead the green transition in transport over the coming years.

The associations add that the AFIR proposal marks an opportunity to establish a European legal framework to support the deployment of alternative fuels infrastructure for rail, especially for those lines that are not mandated for electrification as part of the Trans-European Transport Network (TEN-T).

The AFIR proposal sets more ambitious decarbonisation targets for the rail sector. In particular, the proposal:

Ahead of the upcoming trilogue negotiations, Unife and CER have urgently called on member states and the European Commission to endorse the parliamentary position and maintain the same level of ambition for the rail sector in the final text.

“The deployment of alternative fuels solutions in the rail sector is already a reality in many European countries and is set to grow even further in the coming years,” says Unife director general, Mr Philippe Citroën. “This clearly shows rail suppliers’ and operators’ joint commitment to further contributing to the development of the zero emissions rolling stock market in Europe. For this reason, an adequate European regulatory framework that reflects this growing market was very much needed.”

“Rail is today the greenest means of transport for both goods and passengers and we are committed to further increase our contribution to reach EU environment goals,” says CER executive director, Mr Alberto Mazzola. “80% of train-km already run today on electric energy but of course, as the report says, not all lines can be electrified. We need to progressively shift from diesel locomotives to green technologies but to do this we need access to a proper infrastructure for hydrogen.”

Mazzola also emphasised the difficulties caused by the unprecedented surge in energy charges for railways, which in some countries are the largest single consumer, calling for urgent measures to correct the situation.

“Among them [is] making railways benefit from the windfall revenues to reduce the unit cost of rail electricity and prolonging the track access charges reduction,” Mazzola says. “We need urgent measures to block the reverse of modal shift.”

An earlier version of this article incorrectly stated that the European Council had this month adopted the AFIR proposal. This instead took place in June.