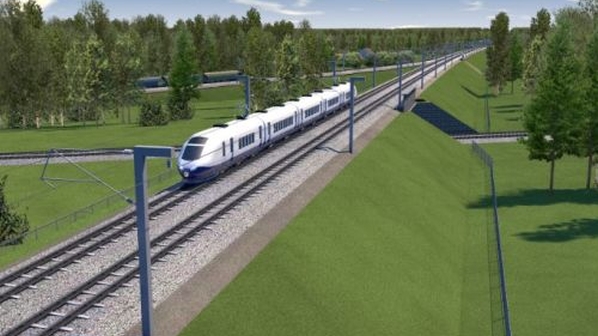 The Rail Baltica will benefit from the €23bn funding agreed by the European Parliament.

THE European Parliament has adopted the €30bn Connecting Europe Facility (CEF), which will offer funding for transport, energy and digital projects, including Rail Baltica, alternative fuels charging infrastructure and the roll out of 5G coverage.

The terms of the CEF programme was agreed between parliament and council in March and the aim is to complete the funded projects by 2030.

MEPs were able to earmark 60% of CEF funding for projects that will help deliver the European Union’s (EU) climate objectives. A further 15% of energy pillar funds will go to cross-border renewable energy projects.

CEF is structured into three pillars, with €23bn for transport, €5bn for energy projects and €2bn for digital schemes. Around €10bn has been allocated to cross-border transport projects that will come from the Cohesion Fund and will help complete previously identified missing transport links. There will be €1.4bn designed to fast track the completion of major missing cross-border railway projects and these will be selected by the European Commission (EC) on a competitiveness basis.

In the digital sector the CEF will support the development of projects including safe and secure very high-capacity digital networks and 5G systems, as well as the digitalisation of transport and energy networks.

The European Parliament also approved new Trans-European Network (TEN-T) rules, agreed with the Council, that will simplify the permit-granting procedures for TEN-T projects to ensure their completion. However, member states will need to designate a point of contact for each project’s promoter and ensure that getting a permit to launch a project should not take any longer than four years.

“The CEF will modernise transport connections all over the EU,” says Mr Marian-Jean Marinescu, transport and tourism committee rapporteur. “It will help Europe cope with the sector’s decarbonisation challenges and contribute especially to make the ‘shift to rail’ slogan a reality. Filling in missing links will also encourage the movement of people and goods.”

“Achieving the Green Deal will not be possible if we do not upgrade our infrastructure for the coming digital and environmental transitions,” says transport and tourism committee co-rapporteur Mr Dominque Riquet.

The upgraded CEF will come into force once the new rules have been published in the EU Official Journal. They will apply retrospectively from January 1 2021 and member states will have two years to prepare for the implementation of TEN-T streamlining rules.