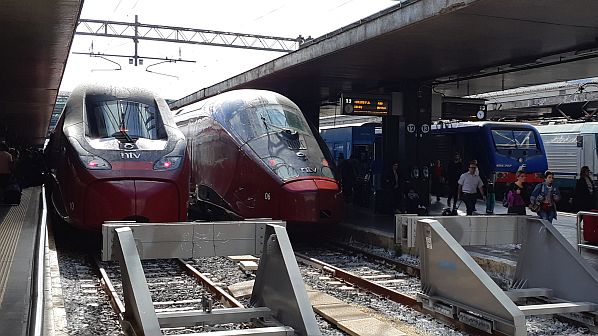 Italy, which has been worst affected by the coronavirus outbreak, has introduced stringent movement restrictions with travellers forced to complete a government form to justify their need to travel.

Both Trenitalia and NTV-Italo have cut the frequency of their high-speed services. Trenitalia has published a list of Freccia trains which are running today on its website. Both operators have closed their passenger lounges at stations, suspended at-seat service and are trying to maintain a 3m distance between passengers inside trains.

Trenitalia has installed hand sanitisers on trains and both operators have stepped up train cleaning. NTV-Italo has issued train staff with specific instructions as well as protective equipment such as masks, disposable gloves and hand sanitiser.

Thello has suspended both its overnight sleeper service between Venice, Milan and Paris, and its day trains linking Milan, Nice and Marseille until April 3. However, French National Railways (SNCF) appears to be still running its Paris - Turin - Milan TGV services.

DB says it has increased the use of soap and disinfectants on trains by up to 20% and is gradually reducing the already tight intervals for cleaning long-distance trains from four to two hours. SNCF has taken similar measures.

Danish State Railways (DSB) introduced a range of measures on March 11. These include running longer trains during off-peak periods to allow passengers to sit further apart from one another, making all tickets refundable at no charge, no longer accepting cash payments onboard trains, deploying more staff at critical locations, and improving communication with passengers.

“The government has specifically encouraged travellers on public transport not to travel during peak hours as far as possible,” says Mr Flemming Jensen, DSB’s CEO. “It is also necessary to implement a number of changes in daily operation that support the authorities’ efforts to curb the spread of infection.”