Portuguese transport minister, Pedro Nuno Santos, says the sector must increase the expectations of what is possible as key industry figures weigh on the opportunities presented by the initiative. 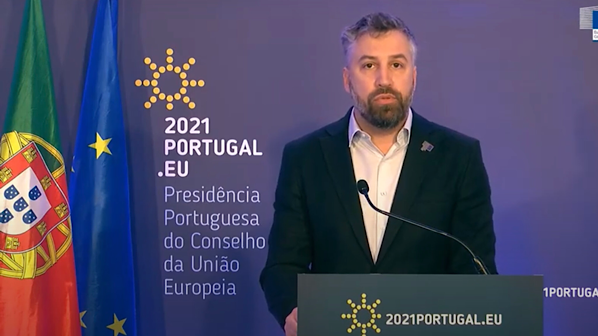 Portuguese transport minister, Pedro Nuno Santos, opened the conference with what he referred to as some “provocative” points of view.

THE European Commission (EC) officially launched the European Year of Rail during an online event held on March 29 and Portuguese transport minister, Mr Pedro Nuno Santos, took the opportunity to remind delegates of the challenges of achieving the objectives of the EC’s Sustainable and Smart Mobility Strategy, which is closely aligned with the Europe Union’s (EU) Green Deal.

Modal shift from road and air to rail as the most sustainable transport mode is considered a priority by the EU to reduce transport greenhouse gas emissions, which account for 25% of the total in Europe. During an address to open the conference, Santos, said the strategy’s objectives, which includes doubling freight traffic and tripling high-speed rail traffic from 2015 levels by 2050 “are very ambitious when seen from the perspective of the investment needed to achieve them.”

“If we take a closer look they will take an expansion in capacity and territorial coverage of rail network not seen since the 19th century,” Santos says. “On the other hand, meeting these milestones might not be enough to ensure a significant modal shift to rail from other less sustainable modes like road and air transport.”

Santos says tripling high-speed passengers over 35 years is equivalent to yearly growth of 3%, which is lower than the average 4% annual growth experienced in air travel in Europe between 2011 and 2019. Doubling rail freight volumes over the next 35 years is equivalent to 2% average year-on-year growth, which he says will easily be overtaken by overall volumes brought by even modest economic growth.

“If we remain convinced that modal shift to rail is key to sustainability of transport the bar must be set even higher,” Santos said.

Europe’s transport commissioner, Ms Adina Vălean, described designating 2021 as the European Year of Rail as the “natural choice” following the adoption of the EU’s Green Deal and the Sustainable and Smart Mobility Strategy. However, she said the symbolism of the event, emphasised by the Connecting Europe Express, would be outweighed by actions during the year.

Vălean referred to the strategy’s goals to reinforce the EU’s TEN-T network including building new lines, filling missing links and removing bottlenecks, and updating existing corridors with the goal of completing the core network by 2030. A rapid rollout of ERTMS, automation where applicable, and installing a digital layer was also cited as a priority. Indeed, ERTMS is installed on only 15% of Europe’s key corridors and even less of a proportion of rail vehicles, and is absent on a number of cross-border links.

“Only when ERTMS is Europe’s sole signalling system will we stop exchanging locomotives at borders,” Vălean said.

Mr Henri-Poupart Lafarge, CEO of Alstom, and chair of the European Rail Industry Association (Unife), said that the EU’s Recovery and Reinvestment fund should prioritise investments in the TEN-T network. He added that upcoming spending in national recovery programmes is a “fantastic opportunity” to promote investment and a transition to sustainable infrastructure and mobility. Dr Josef Doppelbauer, executive director of the European Union Agency for Railways (ERA), agreed.

“We now have the unique chance with Covid that we can bring back the single European railway area high on the agenda and I am optimistic that the European Union will spend these funds very wisely,” Doppelbauer said.

Portugal recently unveiled its 2030 National Investment Programme, which includes €10.5bn in main line investment and €5.8 for urban public transport, and is a step change from earlier policies favouring road. Among the key projects are an extensive electrification programme, construction of a Lisbon - Porto high-speed line, and investment in urban rail infrastructure.

Santos argued that only the public sector can commit the large sums required for such projects. By doing so, he said society can collect the even larger benefits in the form of tax and cost savings, increased safety and preservation of the environment. And while he was keen not to dismiss the role of private finance, he believes the successful development of Europe’s high-speed network using public funds is testament to the role the public sector must play.

“Progress on that scale will not be possible while investment levels across Europe stay depressed as they have been since the economic crisis of a decade ago,” Santos said. “Many countries have the will to make these investments, but don’t have the necessary resources in their national budget. We can either give up and hope that road and air transport will become more efficient and sustainable, or we can look at what we have been doing to check that we are on the right course.”

Technological development is considered a means to deliver the capability to deliver modal shift and potentially reduce the scale of investment required in new infrastructure. Mr Carlo Borghini highlighted the important role Shift2Rail and its successor Europe’s Rail will play in identifying market-ready technologies to deliver improved capability, including digital automatic couplers and mainline automation. Poupart-Lafarge cited the capability of ERTMS deployment on the Paris - Lyon high-speed line to increase capacity from 13 to 16 trains per hour as one example of a project that is delivering comparable benefits but a fraction of the cost of building a new line.

Equally MAV CEO, Mr Robert Homolya, who was representing the Community of European Railways and Infrastructure Companies (CER), said digitalisation is the most important tool available to railways to make services more attractive and competitive for passengers. He welcomed legislative measures from the EC to offer flexible ticketing solutions and an EU-wide platform that supports door-to-door journeys between multiple modes of transport. “A fair interoperable, EU-wide platform and the transformation of the legal framework is needed so that it will be suitable for all stakeholders,” Homolya said.

Liberalisation of the market also drew significant attention during the conference.

Santos said “it is undisputed fact” that European policies of market opening and liberalisation have so far failed to deliver an increase in modal share for rail. “It is impossible to know whether these policies have avoided a drop in modal share or if they are responsible for keeping it stagnant,” he said. “This is why we must thoroughly evaluate the affects of rail market liberalisation from not only the standpoint of implementation.”

He added that there is no guarantee that the rail market resulting from Europe’s four railway packages will be more open and competitive, especially in light of the concentration of operations among state-owned railways at the expense of smaller public and private operators.

“We are not calling for a return to the previous closed model of national rail networks with little connection with each other, but we also cannot push forward blindly based on a belief that market competition will supply whatever the citizens need,” Santos says.

Dr Erich Forster, CEO of Austrian private operator Westbahn, who was speaking on behalf of the Association of New Rail Entrants (AllRail), pointed out that despite big investments in infrastructure and public service obligation contracts in recent decades, rail’s overall market share remains only 6.6%. He refuted Santos’ claims and said that all recent rail success stories have involved an element of competition and called for the sector to break new ground in 2021.

“We need competition at all levels,” Forster said. “We need it in open-access long-distance. We need it for the awarding of PSO. And we need it for distribution. We need a complete opening for third-party distributors. We have to follow a new way.”

Mr Clemens Först, CEO of Rail Cargo Austria and chairman of the Rail Freight Forward (RFF) coalition of rail freight operators, which is targeting the 30% market share of all freight carried in Europe by 2030 compared with 18% today, summarised the challenges facing the rail freight sector. Indeed, these mirrored the defining talking points of the debate: rail needs to improve its offer by embracing digitalisation and improving the safety and efficiency of the service offer; the need for high performing European infrastructure; and fair economic boundary conditions which balance the cost between road and rail to encourage more companies to use rail.

“The key to increasing modal share is multimodality,” Först said. “Heavy industry in Europe is not currently growing. If we want to increase transport volumes and to extend our customer base, we need to address smaller and medium sized companies with smaller shipment sizes, which do not have track access, and therefore allow them to send smaller shipments using trucks for the first and last mile.”

It was left to Ms Karima Delli, chair of the European Parliament’s Tran Committee, and commissioner for cohesion and reforms, Ms Elisa Ferreira, to close the conference.

Delli expressed her view that declaring 2021 as the European Year of Rail is “a victory” for sustainability and called on member states to back rail and the sector to follow through with concrete actions. Likewise Ferreira said it is critical for rail to play an expanding role in the new economic and social landscape that is set to emerge in post-pandemic Europe.

“Now more than ever is the time to expand the use of rail,” Ferreira said. “Now is the time to ensure that all regions have modern infrastructure and strong network links. Now is the time for smarter more accessible and user focused, and now is the perfect time to be the year of the train.”