SIX CEOs from some of Europe's leading capital city public transport operators gathered in Rome today and signed a declaration calling for European governments to invest in public transport as a means of kick starting the European economy. 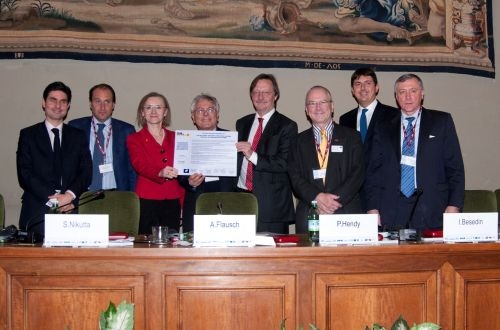 The document calls for governments to commit their limited resources during a period of austerity to initiatives that maximise growth and job creation, while adopting a holistic view of the needs of metropolitan areas, providing a reliable long-term funding arrangement that is matched by regulatory stability, and offering the platform for innovation in policy, management, human resources and technology to flourish. It also includes several commitments from the operators ranging from delivering maximum value for money and working closely with other transport operators to plan for long-term improvements and increasing business efficiency.

"History shows us that underinvestment in transport infrastructure and services is counter-productive," says Mr Peter Hendy, London's transport commissioner. "What Europe's great cities need is stable investment which will allow for key infrastructure to be renewed and for comprehensive programmes to be delivered."

The UITP warns that if car-centric mobility patterns prevail, traffic will gridlock cities. At present greenhouse gas emissions and energy consumption of urban transport is on course to increase by 30% by 2025 putting both economies and the environment at risk.