AS France prepares to open its rail market to competition, the Regulatory Transport Authority (ART) and the Railway Safety Board (EPSF) have signed a cooperation agreement to facilitate the sharing of information. 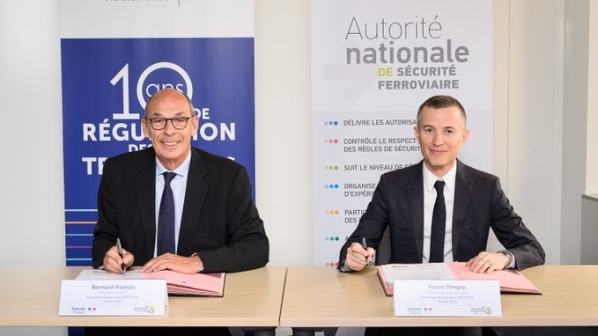 The agreement, signed on June 30, is the result of a directive from the European Union which outlines the need for collaboration between a country’s regulatory body and the national safety authority. The directive calls for the two institutions to “draw up a framework for cooperation and the exchange of information aimed at preventing harmful effects on competition or railway safety.”

While the bodies have previously worked together since they were created, the agreement defines the framework for future exchanges and formalises the good practices that have already been developed.

Under the framework, ART and EPSF will make recommendations to each other on aspects likely to harm rail competition or jeopardise safety, while respecting each other’s independence, skills and the confidentiality of their activities.

The information that can be exchanged includes all data useful for the accomplishment of the missions of the two institutions. If one of the institutions addresses a recommendation to the other, the latter must study it before making a decision and inform the first of the reasons which led them to deviate from the recommendations, if needed.

ART was created in 2010 as the Authority for the Regulation of Railway Activities (Araf), an independent authority to support the gradual opening of the rail network to competition. On October 15 2015, Araf became the Regulatory Authority for Rail and Road Activities (Arafer), responsible for managing public services and competitive activities on behalf of road and rail customers.

Arafer was renamed ART on October 1 2019, after it took over responsibility for the regulation of airport charges, and has since become responsible for the opening of mobility and ticketing data, as well as regulating the activities of the infrastructure manager, SNCF Network, and security activities. Its opinions and decisions are adopted by a college made up of five independent experts, chaired since August 2016 by Mr Bernard Roman.

The EPSF was established in 2006 as the national safety authority for rail. The organisation is responsible for ensuring the safety of the national rail system.

Under the supervision of the Ministry of Transport, the EPSF issues authorisations, carries out audits and inspections, monitors the level of safety by ensuring the classification and traceability of security events, organises feedback at the national level, participates in the development of security rules and contributes to the harmonisation of European rules.

The EPSF is administered by a board of directors, which has been chaired since December 8 2017 by Mr Vincent Pourquery de Boisserin. Mr Pierre Pimpie currently holds the position of general manager.