ACCORDING to German press reports, three senior ministers in the German government have written to the European Union’s environment commissioner Mr Karmenu Vella proposing to make public transport in five German cities free-of-charge together with other measures in order to cut road transport pollution. 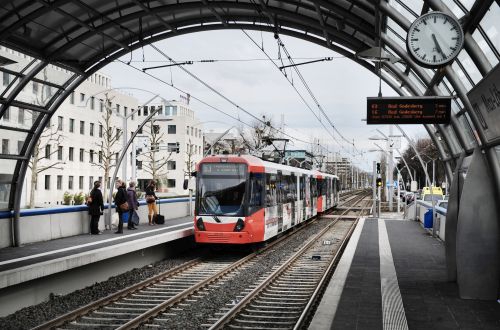 Bonn is one of five German cities where free public transport is being considered.
Photo Credit: Quintus Vosman

Pollution generated by cars, buses and trucks in German cities has been rising and 20 cities will probably fail to meet the EU limit for nitrous oxide by 2020. As a result, the federal government is facing penalties from the European Commission over poor air quality, which could lead to driving bans. A federal court in Leipzig is expected to rule on February 22 whether such bans are lawful.

The five cities selected for the trial introduction of free public transport are Bonn, Essen, Reutlingen, Mannheim and Herrenberg, south of Stuttgart.

The Association of German Transport Companies (VDV) says it is surprised by the proposal to introduce free public transport. “At last, the federal government recognises the key role of public transport for air pollution control and climate protection,” says the VDV’s president Mr Jürgen Fenske. “So far so good! But before you think about free transport, first the conditions must be created for efficient public transport in Germany. Even today, passengers jostle everywhere in buses and trains. A short-term, erratic passenger increase would completely overload the existing systems. In other words, we urgently need to expand the capacity of German public transport with the help of public funding.”

Fenske says all levels of government would need to find a way to finance free public transport permanently and sustainably. “For this alone, we would need about €12bn per year,” he says. “And this does not take into account of the billions needed for infrastructure investment.”