ITALIAN State Railways (FS) plans to invest €94bn to modernise the railway and to double its turnover during the next 10 years according to its 2017-2026 strategic business plan which was unveiled in Rome on September 28. 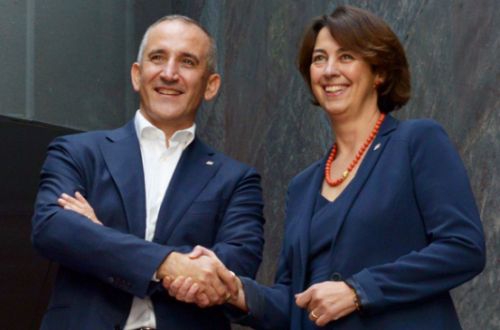 The plan was presented by FS CEO Mr Renato Mazzoncini together with FS president Ms Gioia Ghezzi to a gathering of financial institutions and analysts together with Italy’s prime minister Mr Matteo Renzi and the minister of infrastructure and transport Mr Graziano Delrio.

The plan is designed to transform FS from a traditional national railway into an international integrated mobility provider for both passenger and freight. The plan has what Mazzoncini describes as five strategic pillars:
• greater integration with other operators to provide door-to-door passenger services
• a radical reorganisation of FS’ freight business to turn it into an integrated logistics operation
• integration of rail and road infrastructure
• international expansion, and
• digitisation.


The plan calls for a capital investment budget of €94bn, comprising €73bn for infrastructure, €14bn for rolling stock, and €7bn for technical development. An investment of €33bn is foreseen in the conventional rail network, €24bn for the high-speed network, and €5bn for the TEN-T corridors that cross Italy. Work has started on the €6bn Naples – Bari high-speed project.

FS says €58bn is already available of which €23bn is self-financed and €35bn has been allocated under the contract programme agreed between FS and the government.

Under the plan, FS expects revenue to grow from the €9bn forecast for this year to €17.6bn by 2026 while Ebitda will double from €2.3bn this year to €4.6bn in 2026. Mazzoncini says that more than 70% of the expected growth will be generated from existing activities coupled with the five strategic pillars, which means that business risk will remain substantially unaltered during the 10-year period.

FS wants to play a greater role in urban transport, where rail currently has a 5.2% market share. It will do this by participating in tenders for the provision of services and acquiring other operators where possible.

FS plans to introduce a journey planner so that passengers can plan their trips from door-to-door based on their personal preferences. FS says this is now possible thanks to big data and advanced analysis tools used in digital platforms, which will enable it to add additional services such as station mapping, an electronic wallet, notifications about delays, and video chatting.

The plan assumes that FS will merge with Italy’s state-owned road construction and management company Anas which FS says will produce savings of €400m through rationalisation. Anas has planned investments of €15.5bn, which when added to rail increases total investment to $78bn.

FS intends to spend €1.5bn on developing its freight and logistics business, with €1.1bn allocated to rolling stock, €300m for terminals and logistics, and €100m for information technology. Turnover is forecast to more than double from €1bn this year to €2.1bn by 2026.

The freight business will be restructured to avoid duplication of activities and maximise efficiency under the new name Mercitalia (Freight Italy), which will have three divisions: Mercitalia Rail, Mercitalia Logistic, and Mercitalia Terminal, together employing 4000 people.

International revenue currently accounts for 13% of total income and FS wants to increase this to 23% by 2026 which means international revenue will double over the next decade to reach €4.2bn. Mazzoncini says this will put FS on a par with other European railways.

FS will adopt a three-pronged strategy to develop its international business. One involves building and upgrading railways in other countries particularly for high-speed, such as in Iran where two new lines are proposed. Target areas are the Middle East, the Americas and Africa.

FS also wants to become a high-speed operator abroad. One avenue will be to develop existing cross-border services to destinations in France, Switzerland and Germany through the new Gotthard Base Tunnel, and to Ljubljana, Slovenia and Belgrade, Serbia. Another strategy will be to operate services in other countries in competition with existing operators. Here FS has its sights on the Paris - Brussels, Paris - Bordeaux, Hamburg - Cologne, Athens - Thessaloniski through its acquisition of Trainose in Greece, and London - Edinburgh routes.

Finally, FS wants to increase its presence in the urban transport market outside Italy by leveraging its presence abroad and finding opportunities for road-rail integration through infrastructure projects implemented by FS.