IRJ at InnoTrans: Speaking at the opening ceremony of InnoTrans 2014 in Berlin, the CEO of German Rail (DB) Dr Rüdiger Grube called for rail to be treated more fairly compared with other modes. 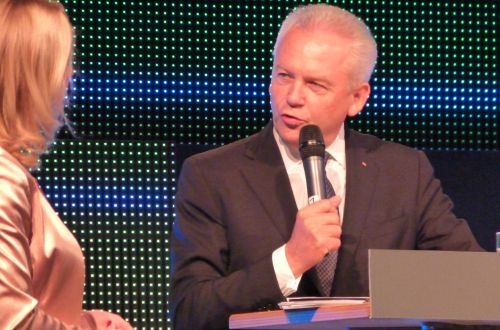 "In Germany each year we pay €600m more than other modes for such things as the carbon tax, passenger rights obligations, and noise abatement," Grübe told delegates. "We must address this."

Regarding rail's competitive position, Grübe pointed to another unfair anomally which needs to be resolved:"Rail has to pay a usage fee, wheras long-distance buses do not."

Grübe also urged the European Union to complete the Fourth Railway Package. "We have been talking about it for five years, but we need to wrap it up now – we can't delay it anymore," Grübe urged. "We need standardisation and harmonisation."

Mr Jürgen Fenske, president of the German Association of Operators (VDV), also complained about the unfair treatment of public transport. "We have to pay one European levy after another, but we are still waiting to hear from politicians how we are going to improve public transport," Fenske told delegates.

"I don't understand why politicians are supporting the introduction of electric cars, but make it more and more difficult to to develop public transport," Fenske said.

As Dr Lutz Bertling, president of Unife, and president and COO of Bombardier, observed later in the day: "The number one provider of e-mobility is the train."