SPEAKING at the Shift2Rail Lighthouse mid-term event in Brussels on November 17, Mr Michael Baldwin, who was appointed in July as deputy director general of the European Commission’s DG Move, said: “Our ambitions are bold and our expectations are high for Shift2Rail.” 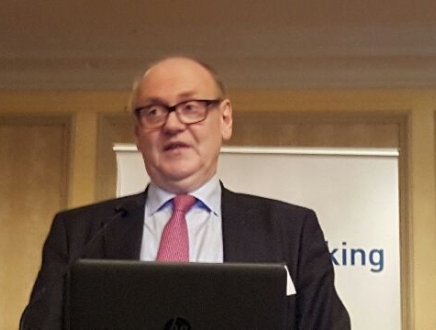 “We will need close cooperation both between and within the research projects,” Baldwin told delegates at the event, which was organised by the European Railway Industry Association (Unife). “We are keen to work with you.

“We need to incentivise a shift to lower emissions, because we haven’t done enough so far. We need to make rail more attractive and competitive.” Baldwin said the ultimate measure of success for Shift2Rail will be to bring the new technologies to market.

When Baldwin was asked whether there will be a second Shift2Rail programme, he replied: “Why not?” Ms Clara de la Torre, transport director with DG Research & Innovation, expanded on Baldwin’s comment by saying: “I see no reason not to have another Shift2Rail programme, but we have to demonstrate that we need one. Rail is competing with other modes.”

Returning to the present, Dr Josef Doppelbauer, executive director of the EU Agency for Railways (ERA), confirmed that Shift2Rail is fully operational. “Some may believe that rail is dead, but we have to innovate because of competition from the automotive and digital sectors. We must create customer value, and achieve a shift from other modes to rail and not from rail to the other modes.”

“Costs are at least 100% too high in rail,” Doppelbauer continued. “Accessibility for the customer is a critical aspect. Please work together, look at the customer value, and how you can quickly migrate to new ideas,” Doppelbauer urged Shift2Rail members.

“€1bn is available for Shift2Rail, so there is no excuse not to change or innovate,” Mr Carlo Borghini, executive director of the Shift2Rail Joint Undertaking, told delegates. “We need consistent and coherent programmes to bring innovation to the market. We want to shape the railway for the future which will change the business model – I’m not sure it will be the same in the future. I have the ambition to create the basis for Shift2Rail 2.”