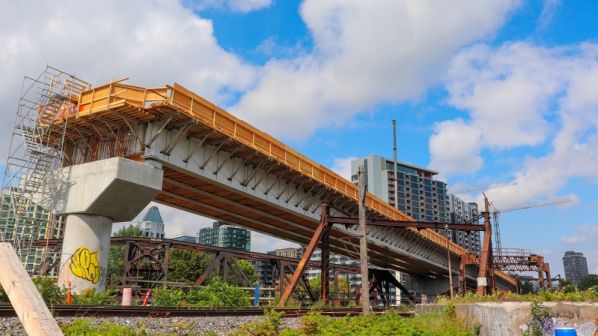 THE city of Montreal and the government of the province of Quebec have stepped in to take forward the eastern branch of the Metropolitan Electric Network (REM) project after project developer CDPQ Infra abandoned plans for the elevated route in the face of public opposition.

Running from Montreal city centre to the far eastern tip of the city, the 32km branch with 23 stations was expected to cost $C 10bn ($US 7.7bn) and take seven years to build.

According to CDPQ Infra, the eastern branch would be unprofitable if it could not straddle streets in the city centre and use land currently forming part of a public park.

In March CDPQ Infra unveiled new designs for the project in response to public concern, which it said addressed 80% of concerns raised in a report by an expert advisory committee. The report was critical of the original design, stating that the large concrete pillars to support the elevated track could end up dividing neighbourhoods.

According to the government of Quebec, certain sections of the route still remain unacceptable to local residents despite the work done by CDPQ Infra.

A new project team including metro operator Montreal Transport (STM) will now work with regional transport authority ARTM to finalise the planning and design of the project. This will pay special attention to providing better interchange with STM metro lines and a more sensitive alignment in the Mercier-Est area.

CDPQ Infra will be reimbursed for planning work undertaken to date.

“Since Day 1, our goal has been to achieve the best possible public transit project in the eastern part of the Greater Montreal area,” says Quebec prime minister, Mr François Legault. “The project has evolved over time and it must continue to evolve. We are making the necessary adjustments to fulfil our commitment to build the eastern branch.”

The REM is one of IRJ’s 20 projects to watch in 2022, which was published in the January edition. Digital subscribers can read the feature here.

For in-depth data on Metro projects around the world, subscribe to IRJ Pro.