Investment in rail, metros and light rail to improve connectivity. 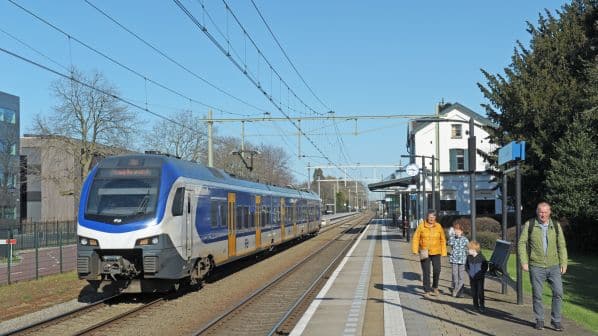 New stations are planned in the Eindhoven area to make effective use of Sprinter stopping services.
Photo Credit: Quintus Vosman

THE Dutch government has budgeted to invest €4bn in public transport infrastructure, with a particular focus on connections to new housing developments to improve their “reachability.”

The Netherlands plans to build over 400,000 new homes by 2030. The government will invest in both major new projects and improvements to existing routes, with provinces and municipalities to contribute funding.

To support the construction of 77,000 new homes along the railway by 2040, €1.56bn will be provided to upgrade the Leiden - The Hague - Rotterdam - Dordrecht line, which is to be widened to four tracks between Delft Campus and Schiedam Centrum to enable the frequency of stopping Sprinter services to be increased.

Stations will be refurbished to create public transport hubs and new stations will be built at Rijswijk Buiten, Schiedam Kethel, Rotterdam Van Nelle and Dordrecht Leerpark.

Investment planned in Rotterdam’s light rail network includes a new, high-frequency route from Rotterdam Zuidplein to the Kralingen district. Much of the budget for Rotterdam will be spent on improving connections across the Nieuwe Maas river which currently divides the city.

In The Hague a new light rail line is planned to Binckhorst where 35,000 new houses are to be built.

Investment of €5.4bn is planned for Amsterdam, of which €4.1bn will be provided by the government and €1.3bn by regional and local authorities.

This will include a major extension of the North-South metro line from Amsterdam South to Schipol Airport and Hoofddorp from 2030, in order to release capacity on the existing railway for inter-city and long-distance services.

Amsterdam South station will be developed as a public transport hub, with new rail infrastructure and commercial property to be built above the ring motorway which is to be placed in tunnel.

A new metro route is also planned from Amsterdam Central station to Hemknoop, where metro Line 50 will have a terminus at Haven-Stad. Light rail Line 5 will also be extended to this harbourside development area.

Over €800m has been budgeted for projects around Eindhoven, and in particular for the railway between Eindhoven and Helmond where up to 60,000 new houses will be built. New stations are planned as well as upgrading others to create public transport hubs.

At Hoogkerk in the western outskirts of Groningen, a new station and bus interchange will be built on the line to Leeuwarden, in order to serve 5000 new homes on a nearby brownfield site.

In order to introduce faster Regio Express services in 2026 and cut journey times by 13 minutes, €150m will be spent to upgrade the Arnhem - Winterswijk route. This will include doubling the single-track section from Didam to Doetinchem De Huet to increase capacity and line speed.

The Arnhem - Winterswijk route has already received substantial investment in recent years after operation was put out to tender by the regional government and passenger traffic experienced specular growth.

Electrification has been planned for the cross-border regional line from Enschede to Gronau and Münster in Germany, with the aim of introducing a direct service between Zwolle and Münster. The government plans to spend €30m on the Dutch section of this route.

A new line is planned in Utrecht to provide a second light rail route between the city centre and the satellite town of Nieuwegein. The new route will be partially underground and will also serve new housing developments in the southwest outskirts of Utecht.

One rail scheme noticeable by its absence from the list of projects to be funded is the Lelylijn, the proposed new railway running for 100km from Lelystad via Dronten, Heerenveen and Drachten to Groningen.

Due to the planned increase in passenger services and the demands this will place on the network, infrastructure manager ProRail will have a budget of €585m for the Rail Capacity 2030 programme. This will improve the stability of railway infrastructure while reducing noise and vibration from train operations, considered as a preliminary condition for future growth in train traffic.

Ms Vivianne Heijnen, secretary of state at the Ministry of Infrastructure and responsible for railways and public transport, says that the government has chosen strong investment in public transport as the way to achieve sustainable “reachability” for new housing across the Netherlands.

She stresses that investment will not only take place in the Randstad conurbation of Amsterdam, The Hague, Rotterdam and Utrecht, “but explicitly also in the periphery.”