A ceremony was held at Oslo Central Station on January 2 to mark the start of work by Bane Nor, Norway’s revamped infrastructure manager, which has been introduced following widespread reform of the country’s railway sector. 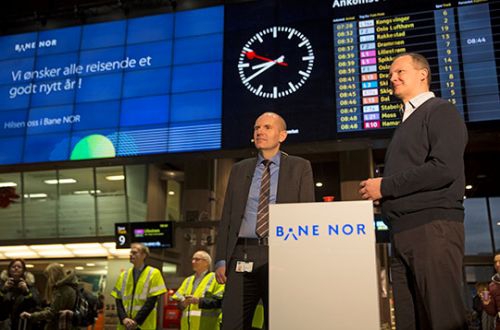 “Bane NOR will be a central part of Norwegians' everyday lives,” says Mr Gorm Frimannslund, Bane Nor executive vice president during the event. “Every year there are more than 73 million passengers through our rail network. The job of our 4500 highly-skilled and dedicated employees makes an important contribution for society to function. We shall endeavour to solve the tasks Bane Nor faces and to meet the expectations placed on us.”

Detailed and high-level planning of rail infrastructure projects is now the responsibility of the new Railway Directorate, which also began work this week. The Directorate will also award future passenger operations contracts, with Norway’s 4167km network set to be split into six to eight biddable packages over the next few years.

NSB is eligible to bid on these, although no date has been set for the opening of bids for the first two packages following delays to the process. Prequalification began in mid-2016 for the North package, which includes long-distance services from Oslo to Trondheim, and related regional diesel-operated services, and the South Package, which encompasses the long-distance service from Oslo to Stavanger and various local and regional services along the route.

In order to offer a level playing field for future passenger operations contracts, as well as its real estate division, the government has forced NSB to shred its hold on ticketing and fares, which is now the responsibility of new government company Entur, while rolling stock is held by Materiellselskapet. Successful bidders for contracts will be expected to lease trains from this company.

For more on Norway’s railway reform, including interviews with the Norwegian Ministry of Transport, the Railway Directorate, and NSB, see the January issue of IRJ, The Railway in 2017, p32.

Bane Nor employees handed out free coffee and buns to passengers across the network the mark the start of the new company's work.