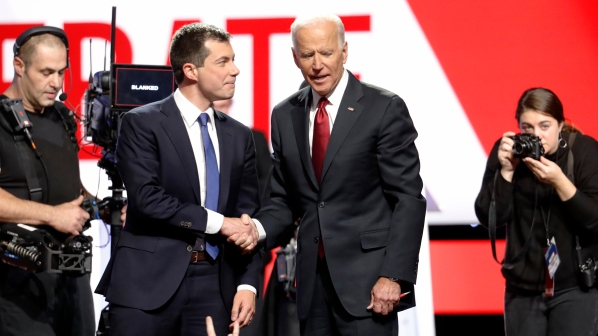 Buttigieg served as mayor of South Bend for eight years following election at 29-years-old in 2011. He decided not to seek re-election in 2019, and became a consultant at McKinsey & Company in Chicago. He was also an intelligence officer in the United States Navy Reserve and was deployed to Afghanistan in 2014, eventually earning the rank of lieutenant.

Buttigieg launched his presidential campaign in April 2019, and became the first major openly gay, and one of the youngest, presidential candidates to win a state caucus or primary when he won the Iowa Democratic caucus in February. However, he dropped out of the race and put his support behind Biden in March.

Announcing the nomination, Biden acknowledged the US Department of Transportation (USDOT) faced a number of challenges. According to the American Society of Civil Engineers, one in five highway-km in the US is in “poor condition,” while tens of thousands of bridges are in disrepair, with some on the verge of collapse. According to the World Economic Forum, the US ranks 10th overall for quality of infrastructure.

Biden said the fight against climate change will develop new jobs, including in the transport sector.

“Jobs that put Americans to work, making our air cleaner for our kids to breathe, restoring our crumbling roads, bridges, and ports, making it faster, cheaper, and cleaner to transport American-made goods all across the country and the world,” he said.

“Jobs that lay the lines for the second great railroad revolution, which will not only slash pollution, but will slash commute times, open up investments in areas connected to metropolitan areas for the first time.”

In accepting the nomination, Buttigieg said he’d had a love of transport since he was a child.

“More than once, as a college student, I would convince a friend to travel nearly a thousand miles back to Indiana on Amtrak, though I know that in this administration I will at best be the second biggest train enthusiast,” he said, referring to Biden’s support for Amtrak.

Buttigieg said the new Biden-Harris administration would look to deliver policies and resources for transport that could create jobs, address climate challenge, and improve equality.

“At its best, transportation makes the American dream possible, getting people and goods to where they need to be, directly and indirectly creating good-paying jobs,” he said. “At its worst, misguided policies and missed opportunities can reinforce racial and economic inequality, dividing or isolating neighbourhoods, undermining government’s basic role of empowering Americans to thrive.”

“Amtrak is excited to work with Transportation Secretary designee Pete Buttigieg to launch an era of passenger rail expansion and improvement across the nation,” says Amtrak board chairman, Mr Tony Coscia. “President-elect Biden knows that rail investments will support economic recovery, expanded mobility, and carbon emissions reduction and we are looking forward to working with mayor Buttigieg and the new administration to advance these essential goals.”

“President-elect Biden has selected an outstanding nominee as Mayor Buttigieg brings a wealth of knowledge to DOT and will be a strong leader for the department,” the American Public Transportation Association (APTA) said. “The public transit industry has faced tremendous challenges in 2020 but has continued to serve millions of essential workers and their communities despite devastating financial hardships. In the coming year, we will need to tackle a multitude of issues, and we look forward to partnering with Congress, the Biden Administration, and secretary Buttigieg to provide emergency funding to keep our systems running and to move forward with a long-term surface transportation reauthorisation.”

“Buttigieg will bring a breath of fresh air to US transportation policy, which has remained largely unchanged since the 1950’s,” National Association of City Transportation Officials (NACTO) executive director, Ms Corinne Kisner, and chair, Ms Janette Sadik-Khan, said. “From a commitment to setting a national goal of zero fatalities on roadways, to evaluating new transportation projects based on how they would improve access to jobs and services, and not solely on outdated traffic flow metrics, Buttigieg has demonstrated support for a sorely-needed fresh approach to mobility.”

“His background as mayor, his military service and his experience as a presidential candidate have well-prepared him to understand the importance of freight transportation services and infrastructure,” Baker says. “His reputation as a practical problem-solver with a vision for the future is a great match for our industry, and we look forward to working with him and his team at the USDOT.”