THE Indian government confirmed on September 5 that Mr Piyush Goyal will replace Mr Suresh Prabhu as the country’s railways minister. 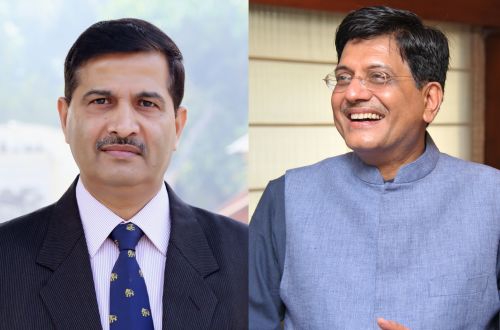 Ashwani Lohani, the new chairman of Indian Railways' board, and Piyush Goyal, the new railway minister

Goyal’s appointment comes just a month after Mr Ashwani Lohani, an Indian Railway Service of Mechanical Engineers cadre officer who had been serving a deputation posting as chairman and managing director of the Air India, replaced Mr AK Mital as chairman of the railway board. Mr Aditya Kumar Mittal, board member (engineering), was also recently sent on leave.

The changes are the fallout from a spate of derailments in recent months. In August, the Puri-Hardwar Utkal Express derailed causing 20 passenger deaths. Two days later, 70 passengers were injured as 10 coaches of the Delhi-bound Kaiyiyat Express jumped the tracks and collided with a dumper truck at Auraliya.

In total, 650 passengers are estimated to have been killed in 346 accidents under Prabhu’s watch since November 2014.

The railway is also facing significant infrastructure challenges, with 40%, or 492 of 1219 sections, operating at or above 100% of the line’s capacity. With capacity to carry out routine repairs restricted, short-term measures are reportedly being deployed while the situation is compounded by previously low spending on associated safety works and a shortage of manpower.

However, to his credit, Prabhu has attempted to address the structural issues facing IR. Plans to spend Rs 8000bn ($US 123bn) on infrastructure improvements over five years had been laid out. In the three years of the Narendra Modi government, new rail infrastructure spending has also increased, while the delivery schedule of projects has been tweaked in order to save time. A rail safety fund worth Rs 1000bn has also been created.

Upon taking charge Goyal said it is his remit is to work on rail transformation template his predecessor has created. In coming months, he will also be required to confront serious challenges concerning the safety of rail operations.