Proposals to expand urban rail in Brazil outlined ahead of elections 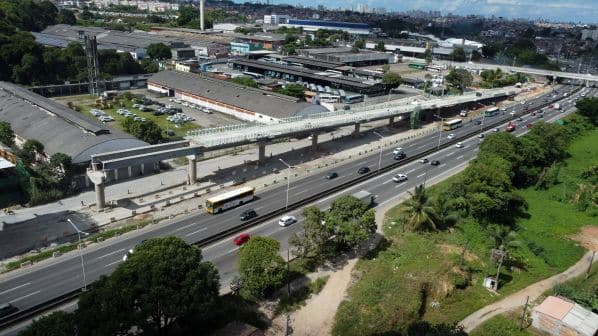 ANPTrilhos says there are projects totalling more than 3000km at the design stage across Brazil that are ready to be built.
Photo Credit: Shutterstock/Joa Souza

BRAZIL’s National Association of Passenger Rail Operators (ANPTrilhos) has presented four proposals in the lead up to the general election in October to expand the country’s 1105km-long passenger network of metros and commuter railways.

ANPTrilhos says there are projects totalling more than 3000km at the design stage that are ready to be built but adds that successful implementation will require efficient polices from the government, which the association has outlined in its Elections 2022 - Proposals for the Advancement of National Urban Mobility document.

“The Brazilian urban railway network has 21 systems, distributed in 11 states and the Federal District, covering less than 50% of the national territory,” says ANPTrilhos chairperson, Mr Joubert Flores. “We are a country of continental dimensions that needs an integrated and efficient public transport network like Europe, a continent with 2 million km2 more than Brazil and with 250,000km of track. We need to invest in public transport on rail, providing quick and safe travel to the millions of Brazilians who depend on this type of transport every day.”

The document presents four proposals for the growth of urban railway systems: reforming the legal framework for urban public transport; a new financing policy; the creation of a metropolitan transport authority with new powers; and the introduction of a national plan for the development of passenger rail transport.

ANPTrilhos says reforming the legal framework for urban public transport will provide more legal security for major investment projects, with the potential to increase the share of private investment in the sector from 56% to 75% within five years.

The association says a new public transport financing policy is also needed as the current model is bringing urban networks to the verge of bankruptcy. ANPTrilhos has proposed changing the model from the number of passengers carried to the number of services provided along with the creation of an operational performance indicator which it says will increase legal certainty, make investment more attractive and encourage operators to improve services and cut costs.

ANPTrilhos has proposed the creation of a metropolitan transport authority responsible for coordinating urban transport across Brazil and promoting projects to serve metropolitan regions, which it says would significantly contribute to the development of metro and commuter networks . ANPTrilhos has suggested the authority would be formed by the federal government, states and municipalities, and would be responsible for long-term planning; the expansion of the network; modal integration; reducing overlaps between modes; more affordable fares; improving regulation; and attracting investment.

The final proposal is the creation of a national plan for the development of passenger rail transport, creating the basis for Brazil to invest in regional and inter-regional connections, an area of high demand and low supply. This includes the creation of a passenger rail network to connect the 25 cities in Brazil with more than one million inhabitants, which would provide more alternatives to air and road.

“Brazil today has more projects to be executed than systems in operation,” says ANPTrilhos executive director, Ms Roberta Marchesi. “This is an indication that we need to advance with sectoral public policies, to leverage the development of the sector, and the proposals presented by ANPTrilhos have exactly this objective. It is urgent that our candidates look at this important economic and social sector and present proposals to seek legal certainty in the market and attractiveness of investment, the only possible way to allow the advancement of urban mobility on rails in our cities and in our country.”

The document (in Portuguese) can be found on the ANPTrilhos website.

Roberta Marchesi was a finalist in the IRJ Women in Rail Awards 2022.