A UBS report has found that the Covid-19 pandemic could accelerate the shift of passengers from air to rail, post-lockdown, with greater than expected growth in the rail industry over the next 10 years. 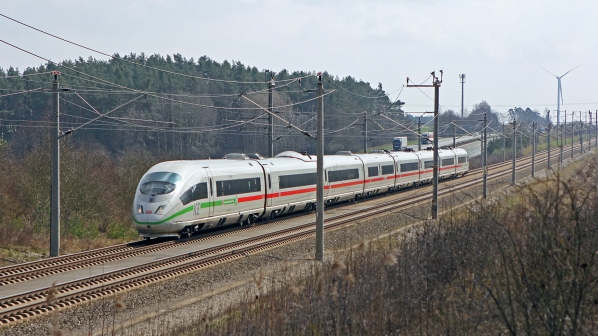 The report from the Swiss multinational investment bank, By train or by plane? The traveller’s dilemma after Covid-19 and amid climate change concerns, says countries are unlikely to abandon their ambition to reduce carbon emissions by 2050, and passengers are more likely accept longer travel times by train.

Covid-19 is still expected to have major short-term implications, with UBS estimating a -0.5% contraction in global GDP in 2020 and 4.5% growth in 2021. However, the rail industry is expected to bounce back, showing strong growth over the next decade.

“As well as the economic downturn triggered by Covid-19, movement restrictions may also be remembered for having abruptly reduced emissions in developed and emerging countries for weeks, triggered new habits such as remote working and the use of social video-calling apps, and giving a majority of the population the experience of much lower levels of pollution,” UBS says. “There could be a strong rise in awareness of the movements campaigning against climate change beyond a few wealthier nations.”

Aviation represents around 2.5-3% of global emissions, but around 15% of transport-related emissions. In Europe in 2017, transport generated 4483 million-tonnes of CO2 equivalent. Road transport accounted for the dominant share of greenhouse gas emissions at 73%, compared with aviation at 14%, maritime at 13.5% and rail at 0.5%.

High-speed trains (HST) could encourage more travellers to move away from air to rail in both Europe and China for both leisure and business if frequency and quality of service improves. Overall, this would reduce the global air traffic growth forecast to 4.6% per annum, versus the 5.1% annual growth estimated before the Covid-19 outbreak by most aircraft manufacturers and traffic analysts in their 10 or 20 year predictions.

“We believe the global, and in particular the European, railway markets are poised for growth rates higher than historical levels in both the near and long term, driven by three key drivers: environmental, social, and governance (ESG) trends, efficiency, and convenience,” UBS says. “HSTs in particular should benefit from these drivers, with the European Railway Industry Association (Unife) forecasting a >10% compound annual growth rate (CAGR) in the medium term, which is significantly higher than the CAGR of 3% it forecasts for rail overall.”

UBS says rail is the best available solution to solve the problems posed by population growth, rising standards of living and increased demand for transport, both locally and internationally.

“In our view, and underpinned by lower financing costs, the political support for rail infrastructure investment is growing significantly,” the report says. “Decision making processes have to both accommodate this growing demand and mitigate its potential risks, especially risks to the environment. We believe that rail is already the most environmentally friendly way to travel between two points, and is becoming even cleaner and less dependent on the electrification of the network.”

The liberalisation of the European rail market is expected to “profoundly” impact both the frequency and affordability of high-speed (HS) and very-high-speed (VHS) services in Europe, two factors that impact travellers’ decision whether to use the plane or other modes of transport.

“Both those factors should improve materially, pulling passengers from airports into train stations,” UBS says. “We think 2019 and 2020 mark the inflection point for the industry. Open network access will be granted across Europe from December 2020. This process should be supported by market liberalisation, as private operators look to outsource maintenance to rolling-stock manufacturers, unlike the state-owned incumbents.”

This growth is expected to have a major impact across the rail industry, with Spain, France, Germany and Italy expected to purchase up to 800 high-speed trains over the next decade, representing an investment of €40-60bn.

Growth could be accelerated by the significant investments in VHS and HS infrastructure taking place in Germany, France, Spain, the Nordic and Baltic regions, and the connections between Eastern and Western European regions.

UBS also expects €6bn in revenue opportunities for signalling suppliers over the next 10 years.

For detailed data on fleet orders and rail tenders from around the world, subscribe to IRJ Pro.