Reducing onboard temperatures by 2°C is expected to save up to 8000MWh. 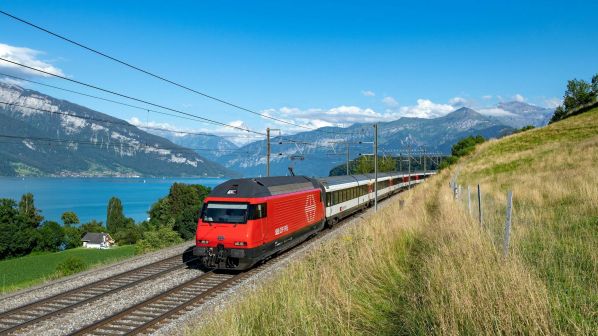 SBB's fleet of Re460 locomotives have been equipped with new power converters resulting in an annual energy saving of around 27 GWh.
Photo Credit: SBB

SWISS Federal Railways (SBB) has outlined a range of measures it is taking to reduce energy consumption, including reducing the temperature in passenger train compartments by up to 2oC where possible.

The move comes as water levels in the reservoirs feeding SBB’s hydroelectric power stations are lower than usual, requiring the railway to purchase more expensive energy on the open market.

The railway says the temperature reduction alone could save 5000-8000MWh between November and February, and passengers and staff are not expected to notice the change. Decorative lighting will also be reduced at SBB’s 30 largest stations, including façade or Christmas lighting. This will not affect basic lighting required for safety in stations.

In addition, SBB will reduce the speed in the Gotthard Base Tunnel from the end of October, which it says will save around 2000MWh per year. SBB says it will only use this measure if a train is running on time, using reserves built into the timetable.

SBB has joined the Energy Saving Alliance set up by the Swiss Federal Department of the Environment, Transport, Energy and Communications (DETEC). The alliance brings together organisations that are taking voluntary measures to use energy more efficiently and sparingly, such as reducing the heating temperature in offices.

SBB says it is currently producing less of its own energy at its hydroelectric plants, as water levels are down to 73% compared with the 10-year average of 86%. To ensure that it can produce electricity during a shortage and continue to maintain rail operation, SBB is keeping water levels as high as possible by purchasing energy on the open market. However, it is already feeling the effect of a sharp rise in energy prices. This has already had a negative impact on SBB’s Energy Infrastructure division first half financial results and will have a further impact on the annual results.

SBB has already taken measures to save gas and electricity, including reducing its gas consumption by 15% by heating buildings less regularly and converting systems from gas to oil, although this produces more CO2. In office buildings, lighting and heating have been reduced and hot water turned off. The lighting of facades and SBB logos at office locations is being dispensed with altogether. SBB is also appealing to its employees to save energy wherever possible.

SBB says that because electrified rail transport is already highly energy-efficient, there is limited potential for further savings, with any future measures likely to affect passenger services. Indeed, if a limit is imposed by the federal government, SBB says it would be forced to greatly reduce service levels, while a cyclical network shutdown would result in rail operation being suspended.

SBB already plans to reduce its energy use by 30% by 2030 compared with 2010 levels, corresponding to an 850GWh energy saving. To achieve this, SBB is implementing energy-saving measures such as the procurement of energy-efficient multiple-units switching to renewable heating systems for buildings by 2030, and through energy-efficient rail operations.

An analysis of the energy crises affecting European railways appears in the October issue of IRJ.