THE Scottish government has revealed its plan to decarbonise the nation’s passenger rail services by 2035. 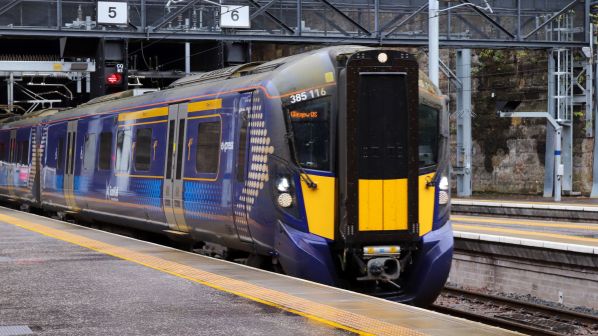 The plan will increase the use of electric trains, which already account for around 76% of all passenger journeys.
Photo Credit: ScotRail

The Rail Services Decarbonisation Action Plan, unveiled on July 28, outlines the government’s strategy to decrease emissions. This includes accelerated line electrification and the rollout of alternative power sources such as hydrogen and battery-powered trains for lines in the more sparsely populated north and west.

The plan emphasises the government’s intention to electrify an average of 130 single track-km per year to reach its 2035 target, following successful previous efforts over the past decade.

Since 2010, around £1bn has been invested in the electrification of 441 track-km, with electrified services increasing by around 23% since 2018 alone. Around 76% of all passenger journeys now taken on electric services, as well as 45% of all freight services. Lines which have already been electrified include the Edinburgh - Glasgow lines via Shotts and Falkirk, and the Stirling - Dunblane/Alloa line.

Network Rail has started design work for the electrification of the following lines:

The objective is to electrify the entire Edinburgh - Dundee - Aberdeen main line. Design work will also be undertaken for the Dunblane - Perth main line. By 2035, the main lines from Edinburgh and Glasgow to Inverness and Aberdeen willl be electrified.

The target coincides with the anticipated end-of-life dates for ScotRail’s current leased fleet of 148 class 156, class 158 and class 170 diesel trains, which will be phased out between 2025-2035.

The plan does not set out detailed cost information regarding the electrification of individual lines, however it assures that thorough cost analyses will be undertaken as planning progresses.

The plan highlights the ongoing implementation of Aberdeen’s City Region Hydrogen Strategy and Action Plan (2015-2025), which the plan views as a potential stimulus for the broader rollout of hydrogen technology on Scottish railways.

However, it also acknowledges that these power sources are currently expensive and limited in output and performance, but that cost effectiveness is expected to increase over time.

The Action Plan also highlights the additional benefits of the shift from diesel, including faster journey times for passengers and freight, improved inter-city connectivity and lower operating costs and improved air and sound quality.

The plan supports the aims of the National Transport Strategy and wider Scottish government policy to decarbonise transport and induce a modal shift to rail. The government plans to reach zero greenhouse gas emissions by 2045, with interim target of 75% by 2030 and 90% by 2040.