IRJ at InnoTrans 2014: THE eight founding members of the Shift2Rail joint technology research initiative are expected to be announced next week, as leaders of the programme have told suppliers not to miss the opportunity to participate in the research projects that will define the future direction of the rail industry in Europe. 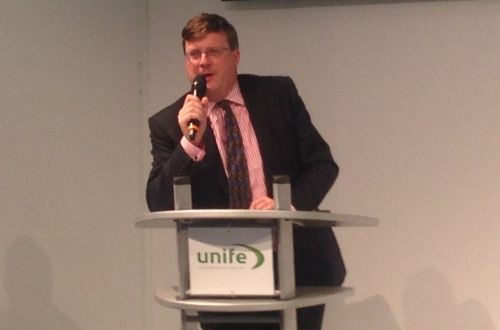 Mr Keir Fitch, head of the Research and Innovative Transport Systems unit at DG Move European Commission, warned against complaceny within the rail industry. He told delegates during a presentation at the European Rail Industry Association (Unife) stand that just because rail is favoured by the European Commission at present this could change if the programme is not delivering what is expected in the EC´s Transport White Paper over the next few years.

"There is a challenge for all of you that as the White Paper is reviewed and updated that the fundamental targets of this document which emphasise rail continue to be thought of as the right targets," Fitch said. "If this does not happen then there may be pressure to rethink these targets."

In a wide-ranging discussion of the structure and history of the Shift2Rail programme, there was also an update on what comes next. The EU Council formally adopted Shift2Rail in July and following the announcement of the eight founding partners by the three-month deadline, the industry will be invited to become associated members of the programme.

"They can participate as single entities or as part of a consortium," says Mr Christos Economou, interim executive director Shift2Rail. "We plan to launch information campaigns detailing how they can apply so there is full clarity of how this process is going to work."

The six-year public-private partnership research and development initiative is worth no less than €920m and will encompass research, innovation, and demonstration activities in all aspects of a rail system. The programme will be co-financed by the private sector and the EU under the EU's Horizon 2020 budget, with the EU set to contribute €450m and industry €470m.