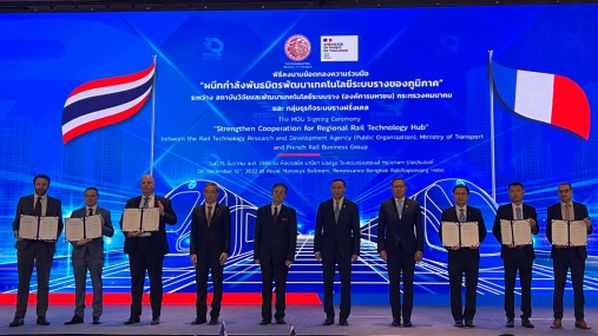 The line-up of ministry officials and company representatives who took part in the signing of the MoU intended to boost Thailand's rail network and related technology expertise.
Photo Credit: Ministry of Foreign Affairs, Kingdom of Thailand

THE Rail Technology Research and Development Agency of Thailand’s Ministry of Transport has signed a memorandum of understanding (MoU) with five French suppliers with the aim of boosting modernisation of the country’s rail network.

The MoU aims to help train staff in the rail sector, transfer technology and encourage domestic production of railway equipment under the Thai First policy.

“This document aims to strengthen the links between our companies and our local partners, in a context of increasing competition in the region, particularly with Chinese technology,” Systra says. It notes that Thailand has a more than 4000km of unelectrified routes.

“It is important for Systra to strengthen its presence in Thailand,” says managing director of Systra Asia, Mr Arezki Touat. “The government’s plans to develop the rail sector are promising and it is in our interest to work together with our counterparts Egis (the MoU coordinator), Alstom, Poma and Vossloh Cogifer. Our common objective is to ensure that the country modernises its rail network and relies on French know-how, particularly in the high-speed sector, where Systra is already active with the high-speed line project linking Bangkok to its three airports.”

The agreement also falls under the Roadmap for Thai-French Relations (2022-2024) which was signed by both countries in Paris in February 2022 with the aim of establishing a strategic partnership by 2024.

Thailand hopes to encourage modal shift to rail away from the private car, and to develop connections with the rail networks of neighbouring countries including China and Singapore.