THE Turkish government has presented a bill to parliament to split up Turkish State Railways (TCDD) to form a separate infrastructure manager and a train operating company, while at the same time paving the way for open-access operators. 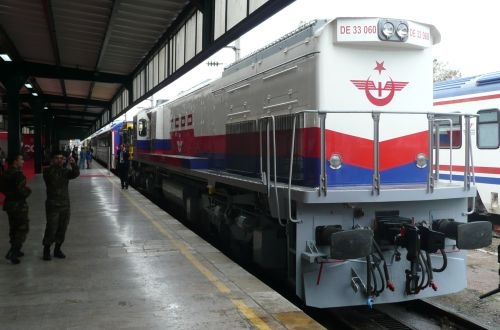 TCDD will remain state owned and funded, and will become the infrastructure manager, while a new company called Turktren will be formed to operate freight and passenger services. Turkey's huge investment programme will be stepped up, the main focus of which is the expansion of the high-speed network. Turkey's minister of transport, Mr Binali Yildirim, says that Lira 26bn ($US 14.86bn) has been invested in rail during the last 10 years, and this will increase to Lira 45bn by 2023.

Depending on the passage of the legislation, it is hoped to allow open-access by the end of 2014, with private operators being granted licences for up to 49 years. "The lines will remain in the hands of the state, but those who ask will be able to use them just like airports and highways," says Yildirim. It is planned to publish a network statement next year which will establish a framework for capacity allocation.

A rail regulator has already been set up following the approval of legislation in 2011 and it started to function in October 2012.

The government wants Turktren's freight operations to become profitable within five years and for rail to increase its share of the freight market from 5% today to 25% by 2023. The government also plans to set up a system to fund loss-making, but socially-desirable passenger services.