UIC and UITP stand up for rail at COP26 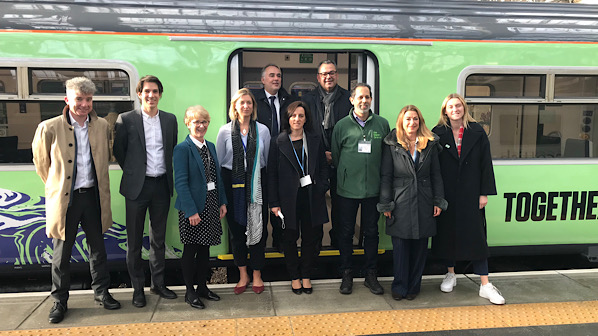 TO coincide with COP26’s Transport Day on November 10, the International Union of Railways (UIC) and International Association of Public Transport (UITP) have issued a joint statement arguing that contrary to debates on developing electric cars, which are taking centre stage in Glasgow, shifting traffic to rail and public transport is the quickest way to decarbonise transport.

Transport is responsible for 23% of global greenhouse gas emissions and the UIC and UITP say that without immediate action, its share of emissions could reach 40% by 2030. “Solutions already at hand can halt the rising emissions from transport this decade but these are too low down the agenda at COP26,” the statement says.

“We need to rebalance the debate on mobility solutions, especially in our cities. By focusing on only switching to electric cars, there is a real risk that our roads will remain unsafe and congested, with persistent particulate air pollution issues. Cities are better when people can move around them, and are not stuck behind a steering wheel.”

UIC and UITP add that there needs to be a greater focus on solutions that provide access to safe and inclusive mobility for all. They say that while electric cars are clearly an important part of the solution to the climate crisis, they are not the only solution, especially for the global south.

“With excellent connectivity to bicycle and pedestrian modes, rail and public transport must be the backbone of this approach,” the associations say. “They provide an affordable, efficient, safe and environmentally sustainable means of transport, one that promotes green growth, enables access and reduces inequality while bolstering the fight against air pollution and climate change.”

Davenne said definitive action is required in the next 10 years to meet the objective of limiting global warming to 1.5C. For rail he says frugal solutions are available to achieve this, pointing to the retrofit of the class 319, which was built in the mid 1980s, into a HEMU for the HydroFlex project. He says the UIC 2030 Vision attempts to demonstrate how quick transformation can have a powerful impact. “Time is a crucial issue now,” he said.

“For rail to become the backbone of mobility, we need to increase our modal share and for that to happen we need support from the policy makers. That is why it is absolutely crucial we are here at COP to demonstrate that we need the support and that we deserve the support. If we just replace cars with electric cars, we will not solve anything… we are demonstrating that we can deliver solutions in the next 10 years and that is absolutely crucial.”

Mezghani underlined the importance of collaboration to tackle climate change. He said that meaningful progress won’t be achieve by working separately. When asked what message he would like to convey to policy makers, Mezghani said that he would like to see public transport and rail included in every national decarbonisation plan. “Right now only 30% of countries have public transport and rail in their decarbonisation plans,” he said.

When asked by IRJ about how rail and public transport might become a more attractive proposition that compels modal shift, Davenne said the emphasis should be on delivering door to door services that are simple and integrated. He said it is very important to get rid of the cumbersome aspect of public transport and move away from a separate local and national visions. He pointed to Switzerland where they have largely integrated local public transport offers. “I think it should be a political priority to make things simple and easy to use for every citizen,” he said.

Mezghani similarly argued that it is essential that public transport advocates speak the same language as politicians, which are largely focused on securing reelection. He said unfortunately growing public transport does not always align with these objectives; big projects for example take years, and something that starts under the leadership of one individual may very well conclude while their successor or even their successor’s successor is in power.

“We need to show them the short-term improvements they can offer their citizens, their voters,” Mezghani says. “It is important to show them quick wins during their mandate, so at the different steps of the project they can gain credibility and acceptance from the population.”

Mezghani said such measures can include integrated and simplified ticketing, improvements to stations, and offering compensation to retailers impacted by disruption. He said Strasbourg and Montpellier in France are good examples of cities that have adopted this approach.

The joint statement concludes by pointing out that Transport Day falls against the commitment by world leaders in the first week of the conference to deliver a clear shift from ambition to immediate action. UIC and UITP say this is why they are sending a clear message to COP26. “Let’s move people not cars, for the benefit of people and the planet.”

“If we really want to make transport faster, cheaper and easier for all, let’s first provide people with more and better public transport,” the associations say.

“We still have a vision of public transport that is local and national,” Davenne said. “We need to have a strong marketing approach to say it is time again to go to work on a bike, or take the metro and other forms of public transport. For that we need an integrated ticketing system. This is innovative but its not a revolution.”