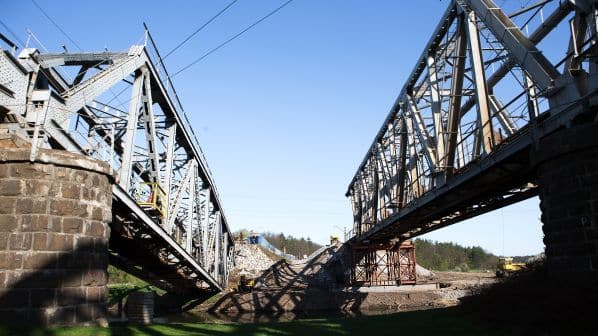 Ukraine's rail infrastructure has been the target of Russian attacks.
Photo Credit: Verushka/Shutterstock

THE Global Ukraine Rail Task Force has called for a specific Marshall Plan for the rail sector in Ukraine, due to its “central and critical role both now and during the future reconstruction of the country.”

This would be similar to the US-funded Marshall Plan which helped revive western European economies after World War II.

The task force is a group of railway professionals working on a voluntary basis to help the Ukrainian rail sector during the present conflict that has followed the Russian invasion.

It is chaired by former US Federal Railroad Administrator, Ms Jolene Molitoris, who says that the Ukranians are committed to winning the war.

“A New Marshal Plan will do justice to this great commitment by Ukraine and those who have supported Ukraine by assuring that there is a real plan in place for rebuilding the country, the infrastructure, the cities, the railway and all that makes Ukraine the special country that it is so that Ukraine can play its unique role along with all other democracies in assuring that not only Ukraine but all of us live in freedom in the future," Molitoris says.

A Marshall Plan was proposed earlier this year by Ukrainian Railways (UZ) CEO, Mr Oleksandr Kamyshin, who is a member together with Molitoris of the Steering Committee of the Global Ukraine Rail Task Force.

Ukraine’s allies now needed to discuss “how to ensure and how to sustain the financing of the recovery, reconstruction and modernisation of Ukraine for years and decades to come,” he said.

Von der Leyen said that the World Bank had estimated at €350bn the cost of the damage inflicted on Ukraine so far.

“The scale of destruction is staggering,” she said. “We need all hands on deck - the G7, the European Union, Europe; strong partners like the United States, Canada, Japan, the UK, South Korea, Australia, New Zealand and many, many more.”

For its part, the Global Ukraine Rail Task Force is providing a forum to analyse the impact of the Russian invasion on Ukraine’s rail sector and to seek solutions.

It has set itself the twin goals of addressing the humanitarian crisis confronting the rail sector, and rebuilding rail infrastructure to make good war damage and meet the long term needs of “a democratic Ukraine linked to the European Union.”

The task force is also working to increase capacity for domestic and international passenger traffic, and to maximise freight capacity for exports to the EU and imported fuel.

Preliminary studies are to be undertaken of how best use rail to move grain and fuel, and the task force is looking to facilitate the allocation of 1435mm-gauge rolling stock and increase capacity at European freight forwarders and terminals.

The Steering Committee of the Global Ukraine Rail Task Force is co-chaired by Mr Nick Brooks, secretary general of the Alliance of Rail New Entrants in Europe (AllRail). Vice-chair is Mr Ray Chambers, president of the US Association for Innovative Passenger Rail Operations (Aipro).