Transport is set to receive $US 312bn and transit $US 49bn but bipartisan deal relies on Republicans backing American Families Plan. 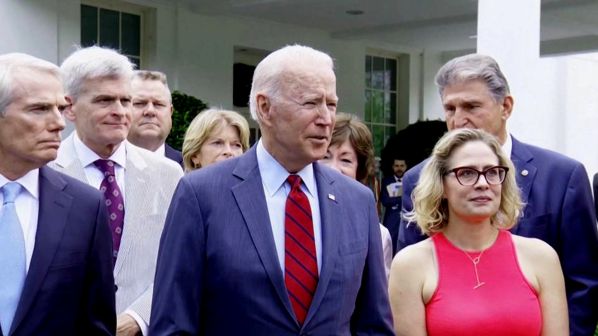 UNITED States president, Mr Joe Biden and a bipartisan group of US Senators have agreed a five-year, $US 973bn infrastructure framework that includes $US 579bn in new spending over that period, of which $US 312bn is slated for transport.

Of the new transport spending, public transit would receive $US 49bn; passenger and freight rail, $US 66bn; ports and waterways, $US 16bn; roads, bridges and major projects, $109 bn; and airports, $US 25bn. The framework also includes $US 266bn for other new infrastructure spending on water, broadband and power infrastructure, for instance. Added to a baseline of $US 394bn, the framework would total $US 973bn over five years. If extended to eight years, the entire package would total $US 1.2 trillion - 55% of what the White House originally proposed, and which most Congressional Republicans opposed.

The framework will “[i]mprove healthy, sustainable transportation options for millions of Americans by modernizing and expanding transit and rail networks across the country, while reducing greenhouse gas emissions,” according to a White House Fact Sheet released on June 24. “The Plan is the largest federal investment in public transit in history and is the largest federal investment in passenger rail since the creation of Amtrak.”

However, the deal is not yet sown up. Biden told reporters that a deal was done on a $US 1.22 trillion bipartisan infrastructure package, but added that the only way he would sign it into law is if it is connected to what he wants in his American Families Plan. That measure commits to $US 1.8 trillion in federal spending on education, children and other areas.

Many Republicans have said that packaging an infrastructure bill with the American Families plan is a deal breaker.

The Democratic-controlled House of Representatives will most likely pass the reconciliation bill whether or not it is associated with an infrastructure bill, which could lead Republicans to reject the infrastructure measure in an effort to put everything on the shoulders of the Democrats.

The public transport sector has widely welcomed the deal. Mr Paul Skoutelas, president of the American Public Transportation Association (Apta), says the industry commends the bipartisan efforts of Senators and the White House in announcing an infrastructure framework that includes significant investments for public transport.

“Our nation demands forward-looking infrastructure investment that modernises public transit and passenger rail systems and meets the growing and evolving mobility demands of communities,” Skoutelas says. “We have a once-in-a-generation opportunity to help our communities meet growing mobility demands, create family-wage jobs, expand US manufacturing and supply chains, and grow the economy.

“While optimistic about the proposed bipartisan framework, Apta reiterates its strong support for H.R. 3684, the Invest in America Act, which will put American infrastructure on a footing to compete with any country in the world. Apta strongly supports the bill and its critical investments for surface transportation infrastructure, including $US 109bn for public transportation and $US 95bn for commuter rail, Amtrak, and other high-performance rail.”