GERMANY’s Association of Transport Companies (VDV) has launched the #BesserWeiter (Better Further) campaign to promote a return to pre-coronavirus levels of passenger traffic as quickly as possible to prevent further loss of income to the industry and to safeguard the sector’s environmental goals. 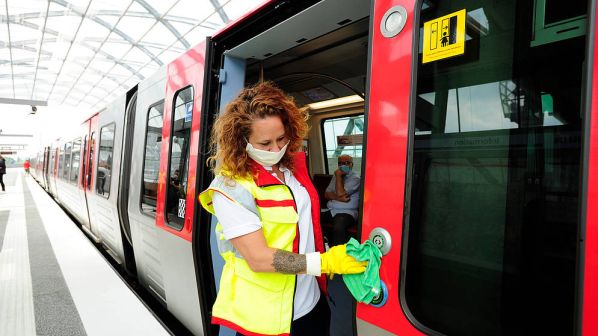 The campaign aims to reassure passengers that trains are clean and safe to use.

The campaign, run in collaboration with federal, state and local governments, was launched on August 19, and currently focuses on promoting proper use of face masks on public transport to combat the spread of coronavirus. From autumn, the campaign will shift focus to directly encourage returning travellers to use services.

A key feature of the campaign is the ‘confidence index’, which will use monthly representative surveys to measure public opinion on public transport, with confidence in the services being rated out of a maximum of 100 points. Presently, the index is at 47.24. The campaign also includes posters and online advertisements.

Currently, masks remain compulsory on public transport following the introduction of the rules on April 22. However, VDV says that as passenger numbers rise, there has been a decline in proper mask usage on public transport, despite its requirement on local services.

VDV supports fines for those disregarding the mask requirement on public transport, although it acknowledges that an overwhelming majority of passengers do adhere to the regulation.

“The transport companies did everything they could during the lockdown to provide citizens with consistently reliable public transport and to protect the health of their passengers and employees,” says Mr Oliver Wolff, managing director of VDV. “We rely on the solidarity and insight of the customers, but we will act consistently against mask refusers together with the police and regulatory authorities.”

VDV reports increases in passenger numbers, with utilisation of trains and buses now at around 60% to 70% across Germany, following a slump to only 20% during March and April. It reports that 78% of the passengers who previously used local transport at least three days a week before Covid-19 are already travelling just as often by bus and train.

VDV adds that many travellers are still choosing to avoid public transport because they fear higher risk of infection, despite no scientifically proven evidence that this is the case. Operators have made their efforts through increased hygiene standards to make passengers feel more secure.

VDV states that 20% of those asked in their representative survey say the health and hygiene measures taken by operators mean that they are now using buses and trains more often again.

“We want to strengthen trust in local public transport with health protection measures,” says Mr Andreas Scheuer, federal minister for transport and digital infrastructure. “Even during the pandemic, buses and trains bring people to their destination in a climate-friendly, reliable and, above all, safe way. With our campaign we are raising awareness and informing how transport companies and passengers can get together better in the coronavirus pandemic - of course only with a mask.”

The German federal government has announced packages of financial support for public transport following the outbreak of the coronavirus pandemic, including a €130bn economic stimulus confirmed in June comprising a cut in VAT and funding for local public transport.