IRJ at InnoTrans 2016: The European commissioner for transport and mobility Violeta Bulc told delegates at the opening ceremony that the railway industry is a key sector for the European Union (EU), but urged it to play an even bigger role. 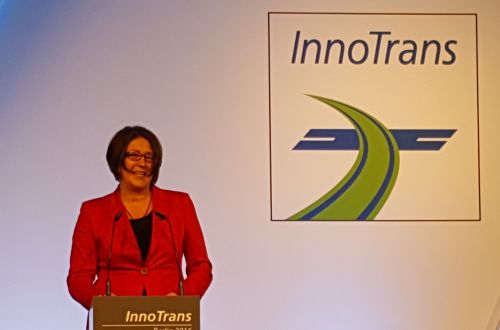 “We want to see more people travelling by train and more companies sending their goods by rail,” Bulc said. “But I still feel there is too big a gap between our citizens and your customers. There are too many services which no longer exist.

“The Fourth Railway Package is the single biggest achievement this year,” Bulc continued. “I am sure we will see the adoption of the market pillar by the end of the year. We saw the adoption of the technical pillar earlier this year, and I expect the European Agency for Railways to become a one-stop-shop for train certification. There will be a massive simplification with the elimination of red tape. We have already abolished 11,000 unique national rules.”

Bulc said she wants to the railway industry to embrace innovation and technology, and she noted that some companies are very active in digitisation. “We must think about digitisation on a European scale and not at the national level because national markets are too small to build digitalisation.”

Referring to the Shift2Rail research initiative, Bulc foresees it leading to new system-wide solutions. “It will enable us to use our money wisely and help to maintain the sector’s competitiveness not just in Europe but worldwide.”

Bulc reminded delegates that rail is the main beneficiary of the EU’s Connecting Europe Facility, but pointed out it is “a drop in the ocean” compared with what is needed. She said there are trillions of euros waiting to be used for good projects. Bulc said €500bn will be available up to 2020 for green and cross-border projects.

Bulc is also very keen to move forward on integrated ticketing. “I want to launch single ticketing for Erasmus students as a trial,” she said.