THE International Union of Railways (UIC) has nominated Mr Vladimir Yakunin, president of Russian Railways (RZD) as its next chairman. The appointment will be ratified at the UIC's next general assembly in Paris in December. Yakunin will then serve as UIC chairman for two years. 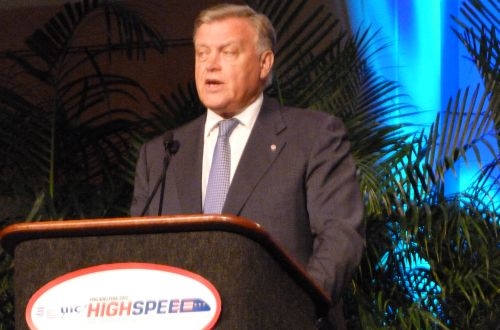 Vladimir Yakunin speaking at the UIC's world congress on high-speed rail in Philadelphia.

Mr Yoshio Ishida bowed out as UIC chairman at the end of the UIC's High-Speed Rail Congress in Philadelphia last week. Ishida was recently promoted to corporate auditor with JR East and is no longer able to chair the UIC. The remainder of Ishida's term of office will be taken up by Mr Satsohi Seino, chairman of JR East.

The UIC has also decided to grant its vice-chairman Mr Mauro Moretti, CEO of Italian State Railways (FS), a new mandate, while Mr Jean-Pierre Loubinoux, the UIC's director general, is to be offered another two-year term starting in April 2013. Both of these appointments are subject to ratification in December.