MTR Corporation's acting CEO Mr Lincoln Leong, who started his new role on August 18, has pledged to sharpen the company's focus on serving Hong Kong by introducing extra services and to deliver its new projects in a "safe and timely manner." 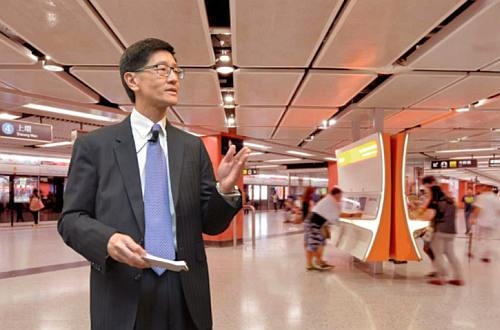 Leong replaces Mr Jay Walder, the former New York MTA CEO, who stepped down on August 15 after three years in Hong Kong following criticism of a two-year delay to the Express Rail Link project, which will connect Kowloon in the heart of Hong Kong with Guangzhou in main land China.

Specifically Leong says MTR will operate 600 extra services to its six busiest lines starting from August 29. These services will also support a trial of the new Early Bird Discount Promotion which offers Octopus smartcard users a 25% discount if they exit any of the 29 core urban MTR stations from 07.15 to 08.15 on Monday to Friday. The trial will run from September 1 to May 31 2015.

"We hope that the new train services and the trial of the Early Bird Discount Promotion will help to ease some of the crowding during the busy morning peak period," Leong says.

Delays to the high-speed project, construction of which commenced in 2010, became apparent by March 2013 which raised the prospect a partial opening of five of the 15 platforms at the line's terminal station by the 2015 expected opening date.

However, in February contractors told MTR that even a partial opening would not be possible until June 2016 and the idea was scrapped altogether following a severe rainstorm in March which damaged a tunnel boring machine. The line is now scheduled to open in 2017, meaning that all of MTR's five current major construction projects in Hong Kong are now delayed.

An internal report issued in July criticised Walder for not exercising "more critical judgment" in respect to monitoring the project's progress and for failing to report the partial opening plans, which were raised by project director Mr Chew Tai-chong, who received most of the blame for failing to report delays to the project. Chew has since announced he will step down in October, a year before his contract was due to expire.

MTR responded to suggestions that the report prompted Walder's departure by stating that it was a mutual agreement and would be "beneficial to the company".

Walder announced in May that he would not stay beyond the length of his contract which was due to expire in May 2015. A global search is now underway to identify his permanent replacement.