ANSALDOBREDA and Chongqing Chuanyi Automation (SICC) have established a joint venture based in Chongqing, China, that will produce and develop electric traction systems, auxiliary services and train monitoring control systems for metro trains. 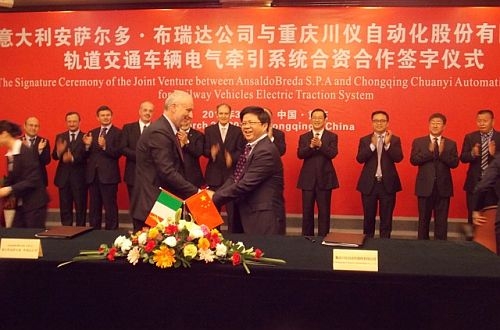 The joint venture is worth €6.3m with AnsaldoBreda set to license its technology for sale in China through the partnership and receive royalties for products sold. Under the terms of the agreement, it will receive €600,000 for a sale plus 2% on the value of the contract.

AnsaldoBreda signed a similar agreement with CNR to produce Sirio LRVs for the Chinese market last autumn and is eyeing significant opportunities in Chongqing, a metropolitan region which is home to 28 million people and has plans to build a network of 10 metro lines. SICC is a subsidiary of Silian Corporate, which is owned by the Chongqing municipality and employs 8000 people.