THE first two CAF Urbos catenary-free low-floor LRVs for the light rail circle line under construction in Taiwan's second-largest city Kaohsiung was unloaded at the port of Taichung on September 11 following a five-week sea voyage from Barcelona. 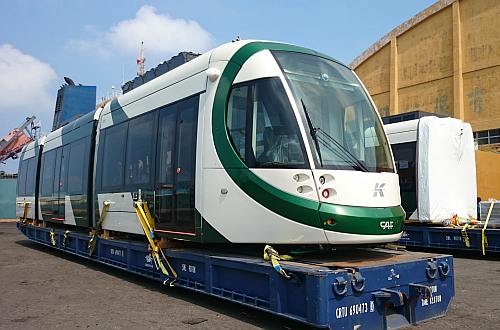 A consortium of CAF and construction company Evergreen was awarded a $NT 5.7bn ($US 190m) turnkey contract in 2012 to build and equip the initial 8.6km 14-station phase, which is due to open in October 2015. As well as vehicles, CAF's share of the contract includes signalling, electrification, and fare collection systems. Following static tests, the first CAF vehicle is expected to begin dynamic testing on the route in November.

Tenders will be invited in the middle of next year for the construction of the 13.5km 23-station second phase, which will complete the loop. The second phase is due to open in 2017 and the total cost of both phases will be $NT 16.5bn.

The 2.65m-wide Urbos LRVs will accommodate up to 250 passengers and are equipped with CAF's ultracapacitor-based Rapid Charge Accumulator (ACR) onboard energy storage system, which will be recharged at stations.