CAMBODIA moved a step closer to the restoration of rail links between its capital Phnom Penh and Bangkok on April 4 with the launch of passenger services on the 48km section of the Northern Line between Sisophon and Poipet on the border with Thailand. 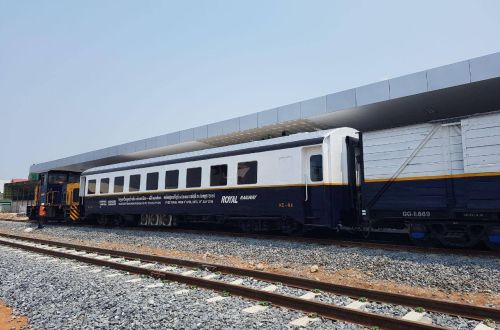 Passenger and freight services on the 385km Northern Line from Phnom Penh to the Thai frontier were suspended in the 1970s due to the civil war, which inflicted serious damage on the line’s infrastructure.

Cambodia Royal Railway is operating three return services a day between Sisophon and Poipet, with intermediate stops at Teuk Thla, Samrong, and Kep and an average journey time of 1h 15min.

To celebrate the upcoming Khmer New Year, the government is offering free travel on the route until July 31.

The rebuilding of the line railway been financed with the aid of a loan from the Asian Development Bank (ADB), which is supporting the rehabilitation or reconstruction of 641km of railway in Cambodia.

Much of the work required to end the isolation of Cambodia’s railway network has now been completed. On the Thai side, State Railway of Thailand (SRT) has completed the rehabilitation of the 6km section between Aranyaprathet station and the border at Ban Khlong Luek.

However, Cambodia’s minister of public works and transport Mr Sun Chanthol says discussions regarding border arrangements have not yet been concluded, and it is unclear when international services will resume between Aranyaprathet and Poipet. Furthermore, reconstruction works are still underway on sections of the line between Sisophon and Phom Penh.

Chanthol says services will be extended from Sisophon to Battambang later this month, Pursat by May, Bat Deng by July, and Phnom Penh "before the end of the year,"

The newly-restored station at Poipet.