The extension adds eight new stations in northern districts of the city. 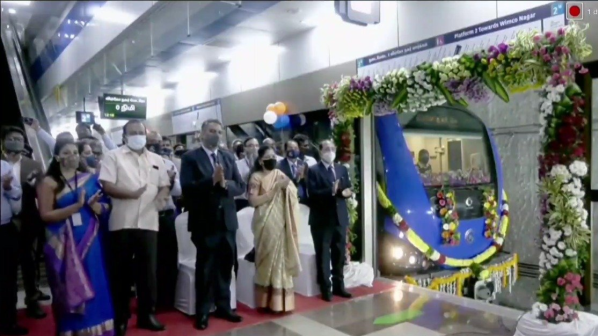 Six of the stations are elevated and two underground, and the extension connects the metro to previously under-served districts of northern Chennai, taking the total length of the two-line network to 53.6km.

Construction began in 2016, and the line was originally planned to open last year. However, the inauguration was postponed due to the coronavirus pandemic.

It follows the opening of a previous 10km extension to the Blue Line from AG-DMS to Washermenpet in January 2019.

During his visit to the state of Tamil Nadu, Modi also attended the completion of two other rail projects: the inauguration of a four-tracking project on the 22.1km Chennai - Attipattu line, and electrification of sections of single-track centred on Mayiladuthurai.

The Chennai - Attipattu project cost Rs 2.9bn and will increase freight capacity to and from the Port of Chennai.

The electrification of the single-track Villupuram - Cuddalore - Mayiladuthurai - Thanjavur, and Mayiladuthurai - Thiruvarur sections, which have a combined length of 228km, will end the requirement to switch to diesel traction between Chennai Egmore and Kanyakumari.

The improvements are expected to save a total of Rs 1.46m of fuel costs per day for services operating on the route. Work cost a total of Rs 4.2bn and is part of the wider project to electrify the entire Indian railway network by December 2023.