CHENNAI International Airport joined the Indian city’s metro network on September 21, with the inauguration of the 8.6km second phase of Line 1 (Blue Line) from Little Mount. 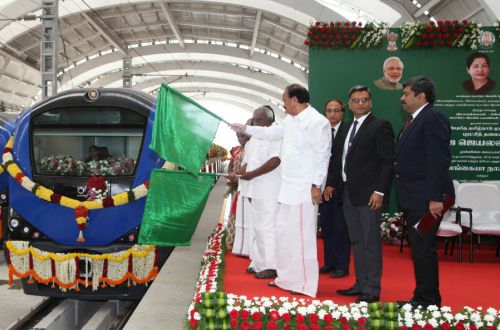 The four-station extension includes an interchange with Line 2 (Green Line) at Alandur.

The second phase of Line 1 is part of the 54.1km first phase of the network, which has a forecast daily ridership of 1 million passengers.

Japan International Cooperation Agency (Jica) is funding 59% of the Rs 200bn ($US 3.3bn) cost of Phase 1, with the Indian government contributing 20%. The balance was borne by the Tamil Nadu state government.

With the inauguration of the Chennai Airport-Little Mount section, India has completed 324km of metro lines with a further 520km under construction and 553km planned or proposed.