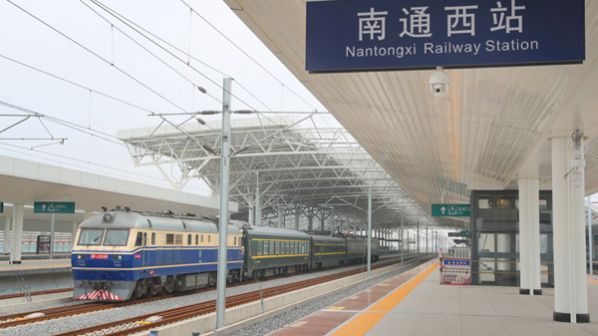 The 143km railway will initially operate a maximum of 44.5 pairs of passenger trains per day, along with six pairs of freight trains daily, at speeds of up to 200km/h. The railway will reduce travel times between the cities of Shanghai and Nantong from 3h30m to 1h6m.

The railway also incorporates the 11km Shanghai-Sutong road/rail suspension bridge, which caries a four-track line and a six lane road, as its primary crossing over the Yangtze river. The bridge has a total length of 5.82km, including a 1088m central span with 306m-high support towers, along with 5.2km of viaducts leading up to it. The introduction of rail traffic on the crossing follows its opening to road transport in 2008.

The railway is intended to improve transport links across the economically important Yangtze delta region. The line is also integrated into China’s wider high-speed rail network, with connections to the Lianyungang - Yangcheng, Nanjing - Qidong, Xinyi - Changxing, and Shanghai - Kunming lines. A connection to the Yancheng - Nantong high-speed line will also be available upon the completion of that line’s construction.

The beginning of operations on the Shanghai - Nantong line follows the opening of the last section of the Shangqiu - Hefei - Hangzhou high speed railway between Shangqiu and Hefei on June 28.