CHINA marked the end of 2018 with a flurry of urban rail project openings in cities across the country. 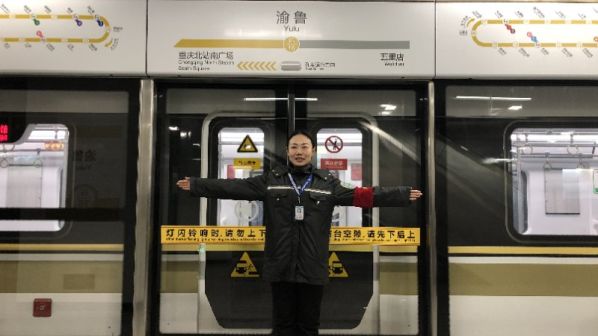 Chongqing's 34.3km northern section of the Loop Line was among the new urban rail projects to open at the end of last month.

In Beijing, metro Line 6 was extended by 10.6km from Haidian Wuluju to Jin’anqiao on December 30. Jin’anqiao is an interchange with S1, the 9km elevated maglev line to Shichang, which opened on December 30 2017. The city also opened the southern section of Line 8 which runs 16.4km with 13 stations (Dahongmen has not yet opened) from Zhuzhikou to Yingahi, and a 1.5km extension of the northern section south from Nanluoguxiang to National Art Museum. The central connecting section between National Art Museum and Zhuzhikou is set to open in 2021.

Shanghai opened two extensions of its metro network on December 30. Line 5 was extended by 16.1km and eight stations from Dongchuan Road south to Fengxian Xincheng. The branch line offers an approximate one-hour journey time to the city centre. The city also extended Line 13 by 16.3km and 12 stations from Shibo Avenue to Zhangjiang Road. The two extensions take the total length of the city’s metro to 705km and 415 stations.

Guangzhou celebrated the opening of a 5.5km eastern extension of the Guangfo Line, which connects Guangzhou with Foshan in the west, on December 28. The extension includes three stations and connects the previous terminus at Yangang with Lijao, where the line interchanges with Line 3. There is also an interchange with Line 2 at Nanzhou. The city also celebrated two major extensions to its suburban network, including a 53.9km extension of Line 14, which serves the northeast of the city, from Jiahewanggang to Dongfeng, and the first 25.2km section of Line 21 from Zhenlongxi to Zengcheng Square via Zhenhong where it connects with Line 14.

In Chongqing two new lines were added to the city’s rapidly growing metro on December 28. Trial operations of the 34.3km northern section of the 51km Loop Line, which connects Chongqing Library with Haixialu via North Railway Station, are underway, while Line 4 runs from North Station to Tangjiatuo with nine stations. In addition, the city extended Line 5 by 2.5km from Dalongshan to Dashiba on December 24.

Chengdu opened extensions to both its metro network and a new light rail line on December 28. The 13.5km light rail Line T2 runs from Chenguang to Hexin Road. The line serves the northwestern suburbs and is currently isolated from the rest of the network but plans are in place for an extension to Chengdu West Railway station and two interchanges with metro Line 2. Two separate extensions of metro Line 3 also entered service. A 12.7km northeastern extension connects Chengdu General Hospital with Chengdu Medical College with eight intermediate stations. In the southwest, the line has been extended from the existing terminus at Taipingyuan, an interchange with Line 10, to Shuangliu West, with 10 intermediate stations.

The residents of Xi’an also celebrated the opening of a new metro line on December 26. Line 4 runs for 35.2km from Xi'an North Railway Station to Hangtian Xincheng, with 27 intermediate stations.

In Qingdao, the city opened suburban Line 13 on December 26. The 66.8km line has 21 stations and connects Jinggangshan Road with Dongjiakou Railway Station. The line is currently isolated from the city’s transit network, running for much of its length along coastal Xihai’an to the southwest of the city centre. However, there are plans to build a tunnel beneath Jiaozhou Bay to provide a direct link.

Finally, in Wuhan, the city extended Line 7 by 17km from Yezhi Lake south to Qinglongshan Ditiexiaozhen on December 28. The extension has seven stations.